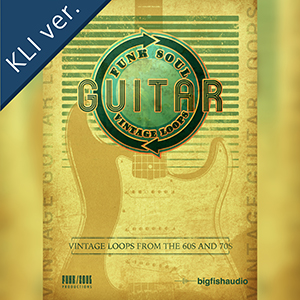 Vintage Guitar Loops is the latest release in the new Funk/Soul Vintage Loops series produced by Funk/Soul Productions and available exclusively from Big Fish Audio. Vintage Guitar Loops is a veritable archive of vintage Funk, Soul, and R&B rhythm guitar loops inspired by actual 60s-70s records - including everything from classic [chicken pickin'] licks to James Brown-style chops, wah-guitar licks, sexy double-stop Soul ballad flourishes, 70s Retro Funk guitar grooves, and much more. It's like having a crate full of classic Funk and Soul guitar loops and licks at your fingertips - all royalty-free.

- Vintage R&B -
Inspired by classic R&B artists such as James Brown, Maceo Parker & the JBs, and the Average White Band

- Soul Ballads -
Inspired by classic Philly Soul artists like The Delfonics, Stylistics, O'Jays, Spinners, Barry White, and Billy Paul, as well as other artists such as Marvin Gaye (later period), Chaka Khan/Rufus, The Impressions, the Chi-Lites, and many others.

The KLI 3.0 Series allows you to quickly arrange and mix tracks in our Kit Combo Patches and make completely original drum tracks with our custom drum patches that include both multi-track drum loops and one-shot samples.

Libraries in the KLI Series (Kontakt Loop Interface) include a custom interface for tweaking loops and sounds beyond what was previously possible. Each loop is given its own patch, and can be extensively edited by manipulating the various slices of the loop. In addition, groups of loops that play together have been given their own patch as well, making it easy to quickly arrange and mix loops on the fly. Each patch will automatically sync with your DAW's host tempo, making integration with your production seamless.
（From  BIG FISH AUDIO）

THIS IS BRAZIL KLI

THIS IS BRAZIL KLI