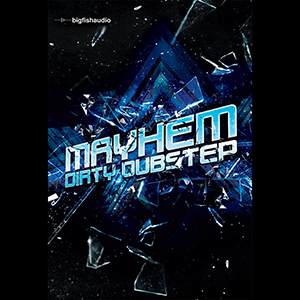 Producer/Composer Adam Smeaton, a.k.a. Dubkiller is back on the attack with his second installment of some of the most epic dirty Dubstep on the market today. Mayhem Dirty Dubstep is 13 full construction kits packed with huge drums, risers, synth leads, FX, and the iconic Wobble Basses we have all come to associate with killer Dubstep tracks. Over 1.5 GB of nothing but the highest quality 24bit Apple Loops, Acidized WAV and REX files makes Mayhem: Dirty Dubstep an instant win for any Dubstep production imaginable. In addition to the demo mixes and stereo files, we have included Multi Drum tracks and one shots for every kit, giving you complete control over the beat and direction of the track. Mayhem Dirty Dubstep is the new standard for Dubstep loop libraries and will keep you coming back begging for more!

Adam Smeaton, better known as Dubkiller, is an artist and producer that seems to defy genres.
"I'm on a constant mission to be moved and inspired by music. Adhering to preconceived notions of what genres should be and what categories songs should be in, is a surefire way to kill creativity and originality,” he insists. “I make music the way I want it to sound.”

As an artist Dubkiller has had chart topping releases on Beatport. He has had songs featured on award winning shows like Breaking Bad and placements with Disney.