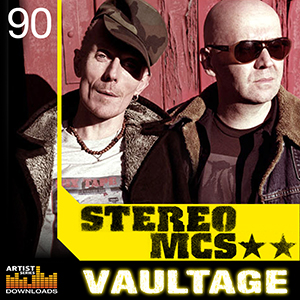 Loopmasters are hugely proud to present "Vaultage" from the Stereo Mc's - possibly the earliest true Dance Music export from the UK, and a band that have been hugely inspirational to a wide variety of artists worldwide, from the Jungle Brothers through to Madonna. Now you can explore the vaults of one of the most experimental electronic music acts, and for the first time have full access to some of the most precious and creative sample collections available worldwide - from the sketches from the early years of their hugely successful 20 year career, all the way up to outtakes from sessions from their new album, Emperor's Nightingale. One of the most successful hip-hop acts to emerge from Great Britain, Stereo MC's formed in London in 1985, when rapper / producer Rob B. (born Rob Birch) and DJ / producer Nick Hallam formed the Gee Street label as a means of promoting their music. The first ‘Rap' group to play at British rock festivals, they managed to fit everywhere and nowhere at once: appearing live with everyone from U2 to the Happy Mondays, from Living Color and Peter Gabriel to Jane's Addiction and De La Soul, the Stereos were exceptions to every rule - the Rap band rock fans could dig, the Dance act it was cool for Indie fans to groove to, sought-after as Remixers, Producers or Collaborators. Following the release of the album Supernatural, Stereo MC's toured with the Happy Mondays and EMF before returning to the studio to record their 1992 breakthrough "Connected", which spawned major hits like "Step It Up," "Creation," "Ground Level," and the title track which led them to win 2 Brit Awards, receive a Mercury nomination and tour the globe. "Vaultage" is a sonic smorgasbord, a diverse and concentrated collection of sounds which draw inspiration from the years of musical experimentation which the Stereo Mcs have pursued, featuring inspiration drawn from Hip Hop, Rock, Funk and Electronic Experimentation. Including outtakes from previous albums, unreleased tracks and sampled sounds from the huge array of live instrumentalists that the group have worked with over the years, and from the electronic machines that they have used throughout this period. Whether you are making Hip Hop, Dubstep, Drum and Bass, House Music or Electronica - we highly recommend that you check out Vaultage for sheer diversity, and the type of pack you will keep returning to when you find your other sound sources are lacking the inspiration you need. Whether you find some Live Guitar Licks, Experimental Drums, Funky Bass Loops, Interesting Vocal Snippets or Rare Percussive sounds - Vaultage will provide you new avenues and ideas time after time. From Dusty Saxes, Howling Trombones, Brazillian Funk Grooves, Old Drum Machines, Processed percussion, Jurassic Beats, Congas, Bongos, Lush Pads and Strings, Funky Grooves, Live Drums, Dub Hits, Organs, Choirs, Guitar FX, Wailing Synths, Sax n Horns, Slides, Stabs... you will find this and a lot more within this consummate sample collection. Vaultage weighs in at 1.3GB and features 955 24 Bit samples, with 394 Loops between 80-150Bpm, and 561 Single Samples. There are no less than 119 patches for Reason NNXT, Halion, EXS, SFZ and Kontakt compatible soft samplers, and Apple Loops, Reason Refill and Ableton Live versions are also available to purchase separately. In detail Vaultage from the Stereo Mcs includes 55 Bass Loops, 23 Brass Loops, 23 Drum Fills, 107 Drum Loops, 7 Flute Loops, 32 Guitar Loops, 45 Keys Loops, 11 Mixed Loops, 53 Percussion Loops, 23 String Loops, 15 Vocoder FX, 15 Bass Hits, 16 Brass Hits, 43 FX, 14 One Shot Guit FX, 26 Vocal FX, 417 Single Drum One Shot Samples, plus lots of Single Instrument Sounds, Reason Kong Kits and 13 Drum Kits!!!! "We made this pack of loops from a 360 degree look at where we've been, where we are and where we're going to, be it Drum-wise, Music-wise or Production-wise. There's extracts of outtakes from recordings dating from the very start of our 20 year career all the way up to unused material from our new album Emperors Nightingale, plus loops and music we made especially for Loopmasters for this release. We felt it could be more of an additional song writing tool and drum/groove library as much as a production device, to help light some fuses and cause some sparks in the writing process. It was built over a period of some weeks as we returned in and out of touring last year so many of the loops will strongly contrast with each other as each time we visited the pack was a new chapter and learning process. We hope you enjoy twisting it up as much as we have." Peace - Rob and Nick Stereo MCs
（From  LOOPMASTERS）