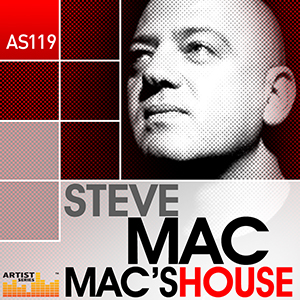 Welcome to Mac’s House as Loopmasters teamed up with the legendry DJ/Producer, Steve Mac with a stunning collection of finely tuned loops and samples, packed with power and punch ready for the dance floor.

Steve Mac, AKA (formerly) one half of the Rhythm Masters began his career as a scratch hip-hop DJ at the age of 11 ? where he spent as many hours a day he could practicing, Inspired by the likes of Marly Marl, Dr Dre, Grandmaster Flash and Jazzy Jeff and many other Hip-Hop DJs.

Steve’s Foray into house music first began in 1989; he became resident DJ at the famous Axis nightclub aged 17 playing house and techno. It was there that Steve met and joined forces with Rob Chetcuti to form the now legendary production and DJ duo: The Rhythm Masters.

Steve and Rob formed Disfunktional in 1996 during this time their remixes of Todd Terry’s Jumping’ and Plastic Dreams really shook up the industry, launching Rhythm Masters into the dance music hall of fame.

In 2008 Steve launched his own label ‘sMACk’ which Steve describes as his ‘Underground Offshoot’; “I’m well known for all the remixes I did over the years such as Jamiroquai, Amy Winehouse , Cee lo Green etc but my label is raw dirty and filthy, the type of music I like to DJ with.”

Since 2011 Steve has released his solo album on Nic Facuilli’s saved records, completely rebuilt his studio and mixed two Orbital new singles including their track for the opening ceremony of the 2012 Paralympics. With big plans for 2013 and beyond, Steve Mac shows no sign of slowing down, keeping him firmly at the top of the, most in demand producers list.

Fans of Steve Mac and indeed any Producers looking for inspiring House samples to shake up their club anthems should check out this collection, so listen to the demos and sample Mac’s House TODAY!
（From  LOOPMASTERS）