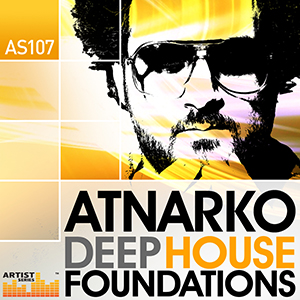 Loopmasters welcome on board the very talented Atnarko with Deep House Foundations, a brand new and inspiring copyright free sample collection laden with all the hottest most wanted sounds from the Deep House scene today.

Produced exclusive for Loopmasters, Deep House Foundations sees Atnarko draw from his dedicated years in the Dance music scene, and puts his much admired studio equipment through its paces creating the perfect Deep House sample collection with hints of the Old School blending with the exciting sound of the Nu School, handing you his trade mark sound.

The spotlight has been shining brightly on Atnarko since he began DJing in Orlando during the early-'90s. Though he was initially influenced by Electro and Industrial, it was the hedonistic allure of House that eventually set the controls of Atnarko's future. After producing few Breaks-oriented tracks for esteemed labels Astralwerks and DB Records, he fully embraced house's sensual rhythms and never looked back.

Atnarko's own sleek productions - which he describes as "Late night fodder for dance floors" - have been pressed for underground imprints including Lazy Days, 20:20 Vision, Robsoul, and Lost My Dog. His recent exploits have earned him much acclaim, with "Thinking Of You," a collaboration with vocalist Sam Mollison for Fred Everything's Lazy Day Recordings, being a recent highlight. A double single, featuring remixes from Pezzner, Peter Christianson from LawnChair Generals, and Fred Everything himself, received huge dance floor support from the likes of Jimpster, Tale Of Us, Ralph Lawson, Lee Curtiss, and many more. This success in part inspired Atnarko to launch his own imprint, the provocatively titled Dance:Revolt label in collaboration with the Dub Creative Group with the first release being Atnarko's own "Violent Sky" earning accolades from industry heavyweights like Nick Warren, Dubfire, John Digweed, Maceo Plex, and Dave Seaman. The single also quickly shot to the top of the Juno Records sales charts, establishing the venture as an early success.

Deep House Foundations has been lovingly put together by Atnarko and includes meticulous sampled Analogue Legends such as Moog and Arp Synthesizers together with Handed Crafted Drum Loops and his unique brand of Deep House sounds and effects driven through SSL pre amps for maximum Punch and Clarity.

Constantly seeking new inspiration and willingness to experiment Atnarko's love for music knows no bounds and it shows in this collection, his attitude, combined with a dedication to his craft and a creative drive guarantees that Atnarko will continue to be a name on the rise and an important, notable figure in dance music for years to come so check out the demo and sample Atnarko Deep House Foundations TODAY!
（From  LOOPMASTERS）