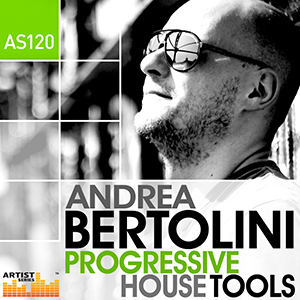 Andrea Bertolini is known for his energetic live performances and technical wizardry, regularly playing at major events like the MTV Music 4 Life Party at Street Parade [Zurigo, Swiss] with big names such as Eric Prydz, Tocadisco, X Press 2, Westbam e and Kurd Maverick to crazy parties out in Kazan, Russia.

Andrea's work ethic is undeniable, he has notched up a whopping 219 releases, featured on 97 albums, collaborated with 95 top international artists, released on 73 of the world's biggest labels, has over 20,000 fans across his social network and has collected just as much if not more in air miles from numerous multinational tours.

"Bertolini is widely known for his Nasty Bass record, an international hit that was included in the sixth volume of the Erick Morrillo's Subliminal Session mixed by Benny Benassi" ukrox

Being recognised as one of Italy's Top 100 DJ's of the past 20 years, appearing on international labels such as Sony Music, Pacha Rec, Definitive, Fresco Rec, Iboga Rec, Echoes, Toca45, Tribal Vision, Ultra, Armada, Warner Music, Virtual Love & his own imprint Btwisted... It's no surprise this super talent is in such high demand all over the world.

Now is your chance to Sample the sound of Andrea Bertolini so check out the demo and get inspired by Loopmasters TODAY!
（From  LOOPMASTERS）