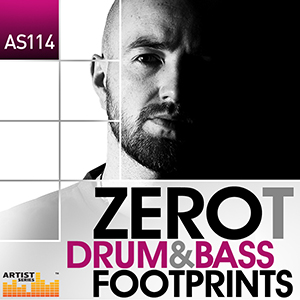 Packed with Fat Breaks, Moody Basses and Dramatic Musical Loops Zero T has produced a monster pack of copyright free samples characterised with his signature sound that will surely inspire producers worldwide, containing enough creative content to roll your own Drum & Bass Anthem and should be considered an essential addition for any modern Producers toolkit.

In late ’99, just as Zero T’s vinyl debut was dropping on Bassbin001, the Mercury/Mobo award winners 4 Hero snapped up some tracks that he and new cohort Beta 2 had done. This led to an EP and a 12″ on Reinforced, the daddy of all DnB labels and not a bad start at all. Soon Zero T and Beta2 were getting to meet the likes of Klute, Fabio, Total Science, Goldie, Digital, Bailey, Flight, Storm, Doc Scott and so on. By 2001 releases were coming thick and fast on labels like Subtitles, Commercial Suicide, Function and Advanced…A noteworthy breakthrough was had with Zero T’s remix of disco classic ‘ Spread Love ‘ by Lenny Fontana which appeared on the seminal Plastic Surgery series on Hospital Records.

Collaborations and releases with Drum and Bass Legends and labels such as Calibre Bryan G and Jumping Jack Frost’s V Recordings Camp, Artificial Intelligence’s Integral Records, Total Science’s CIA imprint, Shogun Audio kept Zero T busy and in demand, so in 2010 Zero T launched his own label “Footprints” as a platform not only for his own music but other artists so far including Calibre, ST Files, Mark System, Need For Mirrors, Beta 2 and UK band All Thieves

A major coup was had in June 2010 when he mixed and compiled FABRICLIVE52 for the esteemed London venue/label. Covering not just the spectrum of DnB, but a sprinkle of Dubstep, Garage, House and Techno in there too, all exclusively sourced from the producers themselves.

2012 saw a number of Zero T releases including the widely rotated Roxy Music EP for Dispatch Records and pair of tracks for Total Science's CIA; Red Hand and Stolen Moments (in collaboration with Riya). He has also been back on remixing duties for Stray/Warm Communications/CIA/Total Science/Kolectiv/IM:Ltd and Lifestyle Recordings, while the Footprints Brand has gone from strength to strength with 12"s from Calibre, Nickbee and Zero T + Beta 2.

2013 will see the debut LP on Footprints in the form of a compilation LP put together by the man himself, featuring tracks from himself and his favourite artists on the scene, both old and new! Also watch out for Pop Productions for the likes of Calvin Harris Vocalist Ayah Marar (track: Lethal Dose) amongst other non D & B Projects.

Loopmasters Artist series goes from strength to strength and as always we offer you a chance to sample from true heroes of their genres, so check out the demos and discover Zero T Drum & Bass Footprints TODAY!
（From  LOOPMASTERS）

TREVOR LOVEYS PRESENTS - IN AT THE DEEP END

TREVOR LOVEYS PRESENTS - IN AT THE DEEP END