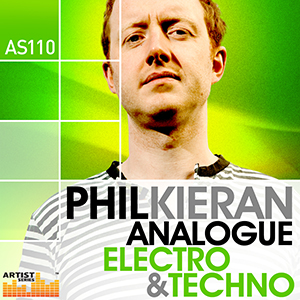 Loopmasters proudly present Phil Kieran with an inspiring collection of copyright free loops and sounds dedicated to Dark and Atmospheric Techno, loaded with Tripped out Sequences and Analogue Beats all with the trade mark sound of Phil Kieran.

Using Belfast as his base Kieran plies his DJ trade in the best clubs worldwide, over the past decade or so Phil has gained his reputation as one of the finest club DJs in the world. He brings the same drive, conscientiousness and desire for each set he plays out ensuring every Phil Kieran gig is one not to be missed and guaranteed to be jam packed with his trade mark sound.

Phil has worked with many top musicians and DJs including Peter Hook, Gary Numan, Green Velvet, Speedy J and David Holmes, and is rightly proud of being handpicked by Martin Gore to remix Depeche Mode's Sweetest Perfection.?When at home he loves spending his days in the studio creating new sounds for his productions, ether by refreshing old material or experimenting with different microphones to record shakers, tambourines, live drums, guitars, vocals, cello and anything that makes an interesting sound. Once recorded he mixes them through vintage compressors and valve outboard gear including the big old battered 1970's mixing desk which dominates the room.

Like many great producers Phil has spent time developing his own unique sonic identity, his productions have that distinct edgy sound that when heard only once, no matter in what genre, you know instantly it's a Phil Kieran release. ?Phil has released on various labels including; Skint, Soma, Cocoon, Novamute, Electric Deluxe, Snork, and his own PKR, Phil has recorded three full length albums, firstly with his now defunked industrial punk techno outfit Alloy Mental in 2007, 2009's Sssh which came out on Sven Vath's Label Cocoon, and 2013's Le Carrousell, with his new live act Le Carrousell.

Fans of the distinct sound of Phil Kieran will love this pack but anyone looking for Dark Atmospheric, Techno inspired samples should, check out the demos and sample Phil Kieran TODAY!
（From  LOOPMASTERS）