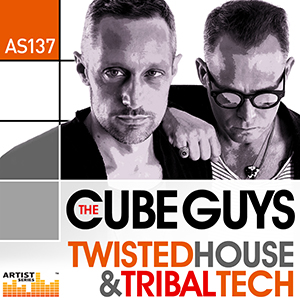 Loopmasters proudly welcome the incredible talents of two of Italy's finest producers The Cube Guys with an electric collection of royalty free progressive House and Tech samples.
Twisted House and Tribal Tech is a tight percussive collection of Dark Twisted Bass Loops, Funky Tribal Drum Grooves and an eclectic collection of Tech Music Loops. The collection also features a wealth of one shot and multi sampled instruments for Synths and Bass, SFX plus 10 ready assembled Drum Kits all with ready to play patches for your favourite soft samplers.
THE CUBE GUYS is a club project born in 2005 from collaboration between two of the most important Italian producers: Roberto Intrallazzi and Luca Provera with the common desire to fuse their individual styles and release new productions to the international club scene.
Roberto Intrallazzi started his musical career at the end of the 80's as one part of the of the most successful Italian production crews of the 80s and 90s, The F.P.I. Project. Their track 'Rich in Paradise' climbed charts worldwide and was considered one of the first house music releases. In the 90's his sound evolved becoming more 'house', but always influenced by the 80's electro experience.
Luca Provera from a very young age has always been a focused producer and DJ, his determination helped him to build up his own recording studio and become a master of both the analogue and digital world of music technology. It was this knowledge that led him to becoming the sound designer for the most important Italian private radio station.
Roberto Intrallazzi first met Luca Provera in the year 2000 where together they worked on the album "The Pleasure is All Mine" by Kym Mazelle. From that moment there production minds clicked and the rest they say is history.
In Detail producers should expect to find 758Mb of 24Bit 44.1Khz Loops and Sounds including 49 Bass Loops, 63 Drum Loops, 52 Music Loops, 32 Percussion Loops, 20 Bass Stabs, 7 Bass Multi Sampled Instruments, 39 Drum Shots, 40 Synth Stabs, 17 Synth Multi Sampled Instruments, 32 SFX Hits, 10 Drum Kits with 138 Drum Sounds, 196 Rex2 Files and 99 Soft Sampler Patches for Kontakt, Halion, Exs24, Nnxt and Sfz formats.
The Collection also comes as Ableton Live Packs, Apple Loops and Reason Refill formats to purchase separately.
If there is one thing these guys know how to do, it's to make the dance floor go crazy and create magical moments. Drawing inspiration from the fresh, cutting-edge of international clubbing, The Cube Guys continue to strive to bring a twisted, yet floor rocking attitude to their productions and DJ performances. Their particular progressive-house sound, combined with tribal elements and vocal contributions have become international and original and you will see The Cube Guys playing at all important parties and clubs all over the world.
Now is your chance to sample from two incredible producers of the Italo scene, make sure you press play on the demo song and download the free to use taster loops from this page and then get ready to sample The Cube Guys ? Twisted House and Tribal Tech Today!
（From  LOOPMASTERS）