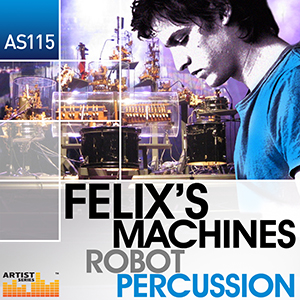 Wires, Solenoids, Gears and Switches are not normally associated with making music but Loopmasters have a very special treat for you as we proudly announce the incredible talents of Felix Thorn and Robotic Music Machines.

Felix's Machines were initially conceived in an experiment aiming to facilitate live music by transforming sound into a three-dimensional visual show. As an ongoing project, the music-performing machines built by Felix do not intend to match human potential. Instead they exist to test the advantages of mechanical instruments alone.

Felix Thorn was born on 23rd December 1985 in Brighton, UK. At an early age he attended Brighton Steiner School where his affinity for the arts gave rise to a preoccupation with drawing, a passion that later developed into oil painting. Then aged 7 he was formally introduced to music and began studying the piano. His lack of inclination towards reading music pre-empted an obsession with jazz improvisation in his teenage years.

At college, Felix developed this sensibility into a new media of music creation when he discovered a keen interest in electronic music production via computer software. He had a love for making music with computer synthesizers and an ability to create in a range of styles, often derived from by organic means.

In this time of music-making and painting whilst studying Sound Art at The London College of Communication, University of the Arts, London, Felix experimented with finding ways to incorporate drawing and sculpture into his sound projects, so Felix began to teach himself electronics which would be the key to fusing his main passions together and soon an army of musical robots began to take over his world.

Included in the Pack are recordings of the Machines in full glory in a variety of venues capturing all natural reverbs and effects of the machines in situ. Robotic percussion also includes a huge collection of loops made from the multi sampled Exs24 sample instruments Felix uses to create more controlled productions. Multi Track MIDI files and Multi Sampled Machine Patches are in there too allowing producers to mix, modify, effect and create their own robotic performances.

The Machines are primed and ready to rock as Loopmasters bring you the first sample collection of its kind with Felix's Machines - Robot Percussion.
（From  LOOPMASTERS）