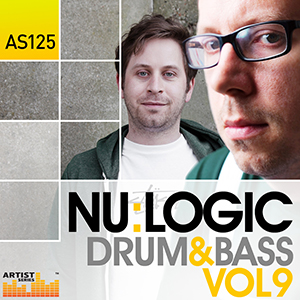 Loopmasters and Hospital Records are proud to present the next instalment in their award winning Drum and Bass sample series ? featuring the combined talents of the brothers Gresham aka Nu:Logic!

This fresh and exciting project is now available and features an incredible selection of Drum and Bass loops, tones and one shot samples which will be forcing their way through the speakers of many producers studios over the coming months.

Packed with inspirational musical moments, revolutionary fx, tight processing and heavy beats and basslines ? the sound of Nu:Logic is a wonderful thing ? being both retrospective in its influence ? jazzy at times and also driving with a menacing, modulating undercurrent.

Nu:Logic is a collaborative partnership between Hospital signings Nu:Tone and Logistics. The two brothers, Dan and Matt Gresham first joined forces under this new alias in the mid noughties, with the first Nu:Logic release "On & On" appearing on Hospital in 2004. The project was put on the back burner with solo albums from each artist respectively, until 2010 when they released their "New Technique" EP to great critical acclaim.

The pair combine the music that they love - music with soul, atmosphere, tension and groove - together into one melting pot of sound. Whilst growing up they were exposed to the same music, but quickly found their tastes diverging. However now they are older, these have moved closer together again and at the core is a shared love of artists such as DJ Shadow, DJ Krush, MoWax, Full Cycle, Heaz, No U Turn, Jazzanova and Calibre.

The debut Nu:Logic album was released in March 2013 to massive critical and popular acclaim with Mixmag proclaiming "What's not to like?". Featuring vocal collaborations with Lifford, MC DRS, Robert Manos and producer de jour S.P.Y the album was also huge among the drum & bass fraternity from Netsky to Subfocus, from DJ Hype to LTJ Bukem.

If you're a Drum and Bass Producer you will definitely need this pack so check out the demo sounds and sample Nu:Logic Drum and Bass Vol9 NOW!
（From  LOOPMASTERS）