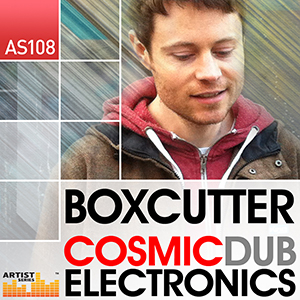 2012 is almost over and what a year it has been with an incredible range titles added to the Loopmasters range and with our Artist Series clocking over 100 unique titles we had to end the year with something a bit special, so with incredible pride Loopmasters announce Boxcutter - Cosmic Dub Electronics.

Boxcutter AKA Barry Lynn who started his music career as a guitarist has been more than a significant blip on the underground's radar since his first vinyl release in 2005. Barry, has restlessly explored a smorgasboard of sonics experimenting with the grime and garage-influenced sounds which are now so en vogue, and early recognition came from tastemakers like J da Flex at BBC 1Xtra and Paul Rose (aka Scuba) at Hotflush Recordings, the label on which Boxcutter had his first release, namely Brood / Sunshine.

Moving to Planet Mu in 2006 brought the first in a long line of releases on the label, namely the Tauhid EP, swiftly followed by the sometime vibrant, sometime violent, but always innovative full length, Oneiric. For its experimentation, the album drew acclaim from the likes of Wire magazine and the BBC Reviews team, as well as an increased number of live gigs around the UK and Europe.

2007 saw Boxcutter craft another full length for his beloved Planet Mu, Glyphic - a record awash with atmosphere and dub rhythms which saw him expand upon the increasingly prevalent dubstep sound. As well as another EP for Hotflush titled, Philly / Endothermic.

2009 saw, Arecibo Message, released on Planet Mu. An unpredictable, personalised affair that envisioned an electronic lineage that goes waaay back, this LP saw Barry shift to an almost completely analogue setup, drawing strange sonorites and tunings out of a selection of vintage machines.

More recently, 2011 saw Boxcutter take another left turn, this time delving into a range of tempos as wide as the gap between him and his peers: The Dissolve fused the organic with the synthetic into lush, brightly-hued compositions, to critical acclaim. From dancehall to hip-hop via jazz funk and hypnagogic pop, it ranged far and wide for inspiration.

2012 brought a name change, and with it a refreshed approach to track-building. The Host joined the dots between vintage library music radiophonics, worn out soul music, and cassette-addled footwork, and also notably featured more upfront guitar playing than his previous releases.

"I take a lot of different approaches to making tracks, so I wanted this sample collection to reflect that some loops have been heavily processed with spectral plug-in and other DSP, especially Audiomulch.

I started using a lot of hardware on my albums from early on, so a lot of the synth loops and patches are from keyboards like the Korg Polysix, Sequential Circuits Pro One and SixTrak, and Roland SH-101. I also used a Mark One Fender Rhodes piano for some loops. There are a few digital synths too though, like a Roland D50, and some soft synth sounds, I still like them for pads.

For drum machines, there's a lot of TR-808, run through guitar pedals like the Boss Digital Delay and Flanger, and some Akai XR-10. I put those ones through a guitar amp and caught the weird boxy sound, and the built-in spring reverb. I did a similar trick with some of the multi-sampled bass sounds, they were fed into a Mu-Tron Phasor II and then into an Ashdown Bass amp. I close-miked the amps and used a Shure microphone.

Most of the sounds have been run through a TLA Ebony Stereo Valve Processor, just to add a little colour from the pre-amp and EQ. Once digitized, I've polished everything with a Waves SSL channel strip.

Some other effects worth mentioning: I used an original Shin-Ei Univibe to add some swirl in places. You can hear some tape delay in places, either a Roland Space Echo RE-201 or a WEM Copicat (these ones have a lot of weird flutter!). And some of the really wet sounds have gone through a home-made spring tank reverb set-up.

I've also sampled some of my guitar, there's a few delay loops. And sounds from an old Omnichord OM-200, multi-sampled instrument sounds and some ribbon sweeps. A multi-sampled Hohner melodica shows up too.

Hope the sounds inspire and end up in some original and creative tracks!"

Boxcutter's own unique take on Electronic music, using hybrid sounds with complex arrangements and processing together with the ability to radically switch between genres whilst retaining his unique vibe, means the often emulated but never duplicated Boxcutter sound has and continues to inspire many budding and well established artists, so this is your chance to sample from a true pioneer in the industry. Check out the demo and sample Boxcutter- Cosmic Dub Electronics TODAY!
（From  LOOPMASTERS）