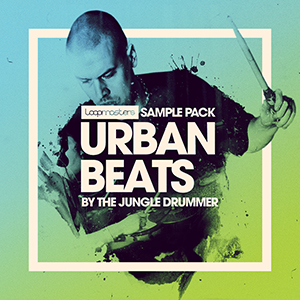 Loopmasters welcome back the very talented Jungle Drummer for a brand new and inspiring collection of live royalty free beats for modern urban producers to dice slice and drop, suitable for Dubstep, DnB, House, Hip Hop or Funk and Garage productions.
The Jungle Drummer is a dominant figure on the club and festival circuit all over the world, with live performances and DJ shows encompassing a variety of styles and genres. He has performed with award winning Drum and Bass Act London Elektricity and has worked and performed with other artists such as Rodney P and Killa Kela, Coldcut, Radiohead producer Nigel Goldrich, Raw Hill Cru, DJ Fresh, Shy FX, A Guy Called Gerald, DJ FU, DJ Craze and The Scratch Perverts to name but a few.
Since 2005 he has been educating Drummers with regular sections in Drummer Magazine, Idrum magazine, and has recently launched a new online Drum site Sticks in Motion.Where you can find his expert tuition and education on all forms of breakbeats,styles and tempos.
"Urban Beats" is a powerful collection of solid live drum grooves which cover many genres including Hip Hop, Dubstep, Breaks, Down-tempo, House, Garage and of course Live Drum and Bass. Producers will find these loops invaluable for adding realism and dynamics to every track they drop them in. Each of the Genres represented includes alternative main groove themes and multiple variations of each theme allowing producers to easily arrange the backbone of a killer drum track.
In detail you can expect to find 704Mb of 24Bit 44.1Khz Loops and one shot sounds including 4 Different Dubstep Grooves with 53 variations, 5 Garage & House Grooves with 52 variations, 5 Hip Hop Grooves with 50 variations, 5 Jungle/DnB Grooves with 60 variations and 54 one shot drum sounds including Cymbals, Hats, Kicks, Percussion and Snares.
The Jungle Drummer ? Urban Beats is a stunning collection of rock solid breaks that will add a live organic element to your productions. If you are looking for some seriously fresh beats that marry perfectly to today’s cutting edge sounds then check out the demo song and download the free to use demo loops then sample The Jungle Drummer ? Urban Beats TODAY!
（From  LOOPMASTERS）