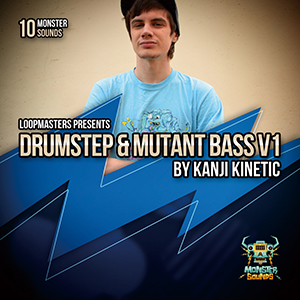 Kanji Kinetic is a guy who has managed to sculpt his own take on the 140bpm mash up game. His first foray into the world of bass and beats came back in 2008 when his debut release was put out by Rag & Bone Records. This saw him grab the attention of Drop The Lime Starkey, Taz Buckfaster, Tayo, Mary Anne Hobbs, B Rich, Chrissy Murderbot, Akira Kiteshi, Reso and DZ with its fresh, energetic mix of bassline, techno, dubstep and chiptune influences.

Continuing to evolve his sound with a wide range of releases and remixes, Kanji's brutal remix of 16Bit's dubstep anti-anthem 'Chainsaw Calligraphy' brought a new wave of fans into the mutant bass sound along with further remixes for Figure, Roisin Murphy, Mustard Pimp & Alec Empire, Kid606, Rico Tubbs, Si Begg, Drop The Lime, Acid Jacks, Jeuce, Egyptrixx, Mikix The Cat, Temper D and Blackmass Plastics!!! Not a bad portfolio for such a young guy with such a focused vision.

Kanji Kinetic began experimenting with different tempos and genres, most notably drumstep with 2010's 'New Era' EP, while remaining in high demand for live shows all over the globe. In January 2011 he started Mutant Bass Records to bring attention to both established and upcoming artists making this fresh hybrid dance music.

The Drumstep and Mutant Bass Sample Pack weighs in at 580MB and includes 534 samples at 24Bit, with 250 Loops between 140 - 175 Bpm, plus 284 One Shot Samples! Included with this pack you get 49 ready to play patches for Halion, Kontakt, EXS, SFZ and Reason NNXT compatible soft samplers. Ableton Live, Apple Loops and Reason Refill versions are also available.

With a solid fanbase and an incredible musical selection when Djing in clubs (Brent from Aquasky had the pleasure of Djing with Kanji at The Social Club in Paris this year and was blown away by the extreme power of his set!) this guy is on the cusp of blowing up BIG... Check this pack to find out how heavy the bass can go and pick up the vibes of his drumstep and 140 Mutant Bass vibes... It will be the best thing you have checked all year, trust us!!!