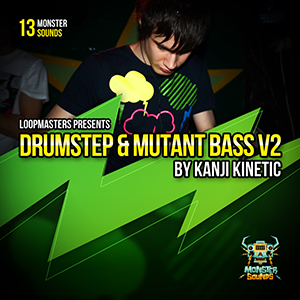 Kanji is back with the second installment to his huge Drumstep and Mutant Bass release on Monster Sounds late last year!

Kanji Kinetic is a guy who has managed to sculpt his own take on the 140bpm mash up game. His first foray into the world of bass and beats came back in 2008 when his debut release was put out by Rag & Bone Records. This saw him grab the attention of Drop The Lime Starkey, Taz Buckfaster, Tayo, Mary Anne Hobbs, B Rich, Chrissy Murderbot, Akira Kiteshi, Reso and DZ with its fresh, energetic mix of bassline, techno, dubstep and chiptune influences.

Continuing to evolve his sound with a wide range of releases and remixes, Kanji's brutal remix of 16Bit's dubstep anti-anthem 'Chainsaw Calligraphy' brought a new wave of fans into the mutant bass sound along with further remixes for Figure, Roisin Murphy, Mustard Pimp & Alec Empire, Kid606, Rico Tubbs, Si Begg, Drop The Lime, Acid Jacks, Jeuce, Egyptrixx, Mikix The Cat, Temper D and Blackmass Plastics!!! Not a bad portfolio for such a young guy with such a focused vision.

This power driven pack by Kanji is set to blow you away with its superbly produced drum loops, dirty wobble bass line and melodic synths. With mixed tempos of 140 /175, spot on for Dubstep and Drum and Bass productions. If you simply want to add texture or a bit of aggy wobble to your productions, then this is the pack for you.

Drumstep and Mutant Bass Volume 2 weighs in at 563MB and includes 504 samples at 24Bit, with 279 Loops between 140 - 175 Bpm, plus 225 One Shot Samples! Included with this pack you get 30 ready to play patches for Halion, Kontakt, EXS, SFZ and Reason NNXT compatible soft samplers. Ableton Live, Apple Loops and Reason Refill versions are also available.

With a solid fan base and an incredible musical selection when DJ’ing in clubs; this guy is on the cusp of blowing up BIG... check this pack to find out how heavy the bass can go and pick up the vibes of his Drumstep and 140 Mutant Bass vibes... it will be the best thing you have checked all year, unless you already own part 1 that is!