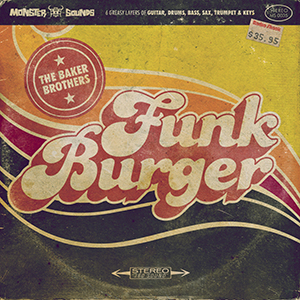 The Bakers Brothers have been frying up a treat over the last few months, So come grab yourself a delicious slice of their FAT funk burger, Made up of 6 greasy layers of Guitar, Bass, Drums, Sax, Trumpet and Keys. Cooked up on a SSL desk and garnished with a sprinkling of original vintage gear the sound is as authentic as you can get.
The Baker Brothers have never been afraid of getting their hands dirty with a little Grit and Grease. After more than 13 years in the game of funk and soul, the band are now gaining veteran status on the world scene for their fluid melodies and grooves. Fresh from touring a busy schedule of festival shows this summer, and about to embark on there 11th Japanese tour the band was all set to start on their 11th studio album but we intercepted them and put the gig ready band into the studio and hit record for this sample pack.
Gaining critical acclaim worldwide The Bakers have sold out Soho's legendary Ronnie Scotts Club and have supported legends such as Sly and The Family Stone, Jools Holland and John Schofield. Their infectious, Raw Beats and Bass Lines underpin edgy Melodic Horns and Funky Guitars. Over their consistently prolific career so far they have gained critical acclaim by the likes of Mr Scruff, DJ Muro, Keb Darge, Florian Keller and Questlove of The Roots. They have worked with guests such as Average White Band's Hamish Stewart, Vanessa Freeman of Reel People and UK percussion legend Snowboy.
The band is made up of 5 experienced musical heavy weights including Drums, Bass, Guitar, Keys, Trumpet and Sax. Bringing years of experience to the session the guys have laid down some fantastic riffs in a truly spectacular collection that weighs in at and incredible 1.24GB with a gut busting 690 loops.
In detail expect to find 126 Bass Loops, 174 Drum Loops, 84 Guitar Loops,(both close mic and room mic versions ) 86 Sax Loops, 77 Trumpet Loops, 59 Key Loops, 690 Rex2 Loops The pack is also available in Apple Loops to purchase separately.
Producers of Funk, Hip Hop, Breaks, Cinematic and Downtempo styles will be amazed at the quality of these sounds, played by one of the tightest authentic funk outfits currently active today.
This is a huge collection of what we consider to be the best royalty free Funk Sample Library on the planet... .
... so go ahead, Get a slice of The Baker Brothers pie for your own productions.