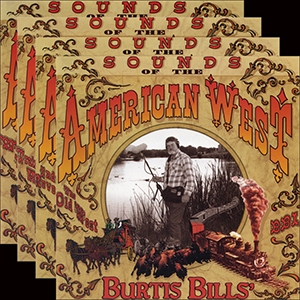 When the West was young and life was simple, when the sounds of a crackling campfire or a lone cowboy whistle could cut through the cool morning air, a young boy and future sound recordist named Burtis Bills listened. And learned.

Bills noticed the sounds of a steam locomotive passing through the depot west of town on a cold, rainy night. He loved it all -- from rails clinking and clacking, to the hollow whistle blaring. But when the new trains moved in and changed the sounds of his small town, he grew nostalgic. He wanted to capture those sounds: the ones that reminded him most of the Old West as he remembered it.

Now, for the first time ever, the sounds of Burtis Bill's Wild West are available to you, digitally recorded on a four CD set. Travel with Bill through the wild western frontier of Colorado, Utah, New Mexico, Arizona, Nevada and Wyoming as he captures the sounds of the untamable frontier.

Disc 1 Capture the feeling of sleeping out on the open range with the sounds of a campfire being built after a hard day's work. Climb on your horse, take a ride in a stagecoach, pan for gold in the great California rush, and hear the echo of the bugle call as you arrive in The Old West.

Disc 2 Experience the transition from frontier to factory with machinery from the Industrial Revolution. Hear the rumblings of a diesel drill and wheat grinder, the gears of hand operated factory machinery, and factory backgrounds dating back to the turn of the century.

Disc 3 Pull into the station with the sounds of a stream train, whistles and blowdowns, bys and steadies, onboard ambiences, and unparalleled air and steam releases. Also included are the sounds of a Model T, from start up to drive away, with interior steady and multiple bys. Disc two also contains weapons, from quickdraws and pistol shots to revolver cocks and chamber spins - everything you need to sweeten an Old West shoot out.

Disc 4 Hear the sounds of what are now ghost towns, with music, dancing, saloon doors, cork pops, spittoon "impacts" and card game trouble. Make your own bar brawl, buy some staples at the old general store, lock up your favorite outlaw or hear a sweet tune on your own Victrola. Create a picture in your mind with the sounds of an entire western town.
（From  HOLLYWOOD EDGE）