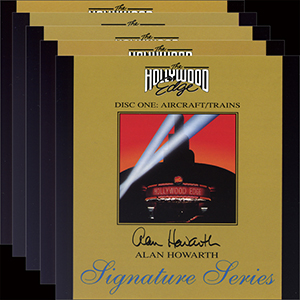 Sound Designer / Composer Alan Howarth created special sound designs for many feature films including all the original group of Star Trek feature films, The Hunt for Red October, The Little Mermaid, Poltergeist, Bram Stoker's Dracula, Stargate, and Back to the Future 2 & 3. As a film composer he scored music with John Carpenter on Escape from New York, Big Trouble in Little China, Christine, and Halloween 2 & 3. He continued solo to score Halloween 4, 5 & 6 as well as numerous genre films. In this first installment, he presents some of his personal favorites as well as field recordings from travels around the world.

"When arrangements were made to create this set of sound effects for The Hollywood Edge, I saw it as an opportunity to present sounds that were from my own "classic" collection as well as effects I have recorded that have special qualities. The sounds contained in this series will fall into two classes, original recordings and sound effects that were modified in a studio environment. My principle sound design tool is a Synclavier 9600. I have used this instrument since 1986 and have my main design elements in this format. As I went through my library, my choices were made with the thought that I wanted to provide a set of effects that could be used to build feature quality sound tracks with excellent detail and variety, rather than just a few samples."

"On the first disk, the focus was on aircraft, aerospace sounds, metallic devices and trains. Disk two contains elements for building earthquakes, fires, ice, and wind tracks. Disk three is a series of recordings from automobile racing as well as crowd effects from Israel. On disk four, I have included elements to address the horror and mid evil genre, with the addition of a unique collection of horse effects. The final disk, number 5, has field recordings of naturefrom Israel and a excellent variety of water and underwater sounds."

"I feel the goals I set out to accomplish have been met, and I look forward to more installments to the Hollywood Edge Signature Series."
（From  HOLLYWOOD EDGE）