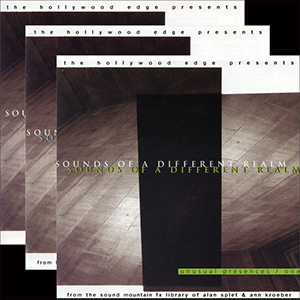 Alan Splet was considered by many to have been the world's greatest motion picture sound designer. His evocative use of ambient sounds helped revolutionize the way we hear movies. Since he passed away in 1994, many have asked his widow and long time collaborator, Ann Kroeber, to publish work from the couple's vast collection.

Ann, and her new company, Sound Mountain, chose The Hollywood Edge to help pay tribute to Alan's legacy and introduce her own innovative recordings. Sounds of a Different Realm includes two CDs of "Unusual Presences" which pay homage to Alan and the couple's long time collaboration with director David Lynch, and one disc of all new recordings titled "Common Sounds Heard in Uncommon Ways" recorded exclusively for this Hollywood Edge release.

- Disc 1 and 2 Unusual Presences A tribute to Alan Splet, the first two discs contain sounds carefully selected by Ann Kroeber from the couple's immense body of work, specifically their collaborations with director David Lynch. While many of the sounds can be heard in Lynch pictures, some have been used in recent box-office blockbusters, and others have never been heard publicly before. This unique collection offers ethereal presences, deep bass textures, ambient hums, swirling winds, steamy atmospheres, whirling tones, gaseous presences, industrial pulsing and much, much more.

- Disc 3 Common Sounds Heard in Uncommon Ways Recorded exclusively for this collection, designer Ann Kroeber introduces a curious world of sound lurking beneath the surface of household items. Ann, using a custom made contact microphone, has captured a unique musicality from the actions of everyday objects. Recording with a standard microphone on one channel and the contact microphone on the other, she has uncovered a new audio dimension unlike anything we've ever heard before.

These tracks are organic and unaltered, except for a few extraneous noises that have been edited out or short fades added. Should you choose to layer, tweak, twist, speed up or slow down any of the tracks, the end result will be the product of your own creativity and imagination.

The versatility and rich color of Sounds of a Different Realm will quickly make this CD collection an integral part of your sound effects library, while the freedom and creativity these sounds provide will make this collection a treasured sound tool.
（From  HOLLYWOOD EDGE）