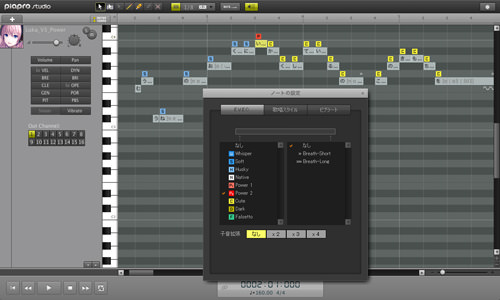 V4X is able to control the new Crypon-developed function E.V.E.C to expand the singing voice's expression and the functions of VOCALOID4 engine through Piapro Studio. Those functions make it possible to express a variety of voice expressions, from voice whispers, nuance of consonants and voice blending to a growling-like voice. As Piapro Studio is in a plugin format that is compatible with both WIN and MAC, it is possible to use the latest voice synthesis functionality in a variety of environments. E.V.E.C. (Enhanced Voice Expression Control) is a newly developed function to expand the singing voice’s expression.

"E.V.E.C." (Enhanced Voice Expression Control) is a newly developed function to expand the singing voice’s expression. "E.V.E.C" enables you to control detailed voice expressions, setting release length and intensity of breaths, as well as emphasizing consonants for more intensity. Get closer to your imagination of a dynamic VOCALOID singing voice than never before!

Differences between V4X and V3

* Note: It used to be necessary to use Append compatible product in multiple tracks and put them together when you wanted to use a variety of singing voice expressions in one song. In some cases, it was also necessary to edit multi track audio.

E.V.E.C lets you control the singing voice freely at each note and each phrase as well. It makes it possible to get closer to your ideal singing voice by controlling voice expressions such as putting strong intensity at the beginning of a song, switching voice databases for a part of the song to whispery voice, or releasing a breath sound at the timing of the last note.

* NOTE: Also E.V.E.C can be controlled on VOCALOID Editor by entering phonemes which make up a note.

3 different sound samples that are created with the different settings of E.V.E.C are played in order.

* NOTE: There may be some changes in the samples as the database used for the samples is still under development.

By controlling the V4X Engine with the Crypton-born vocal editor Piapro Studio, you are given more freedom to control the detailed voice expressions such as nuance of consonant like breathy voice, voice blending, growl (growl-like expressions to the voice).

Growl
It makes it possible to express a growl-like voice by making the voice tremble strongly. It enables to express a variety of singing styles from blues, rock to screamo.
Cross-Synthesis
It enables to create color/tone by blending 2 different libraries and smoothing out the joints between the databases. (※This can be applied to sounds set up with E.V.E.C)
Pitch Rendering
There is a graph that shows pitch and vibrato,which makes it possible to edit the sound by checking the curb of the graph.
Pitch Snap Mode
It is possible to produce robot-like voices easily by turning off the natural pitch curb which is automatically created by the VOCALOID voice synthesis engine.