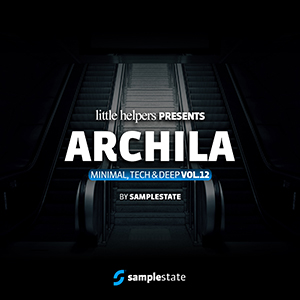 Samplestate is proud to release the 12th volume of the Little Helpers pres “Minimal, Tech & Deep” series, produced by Miami based producer Archila who originally hailed from Bogota, Colombia. At only 18 Juan Jose Archila found his passion and vocation in the thriving Miami underground scene, and his blend of dark, sexy techno has seen him DJ at some of the top venues such as Space, Treehouse, Heart, Bardot, Electric pickle, and has found heavyweight support from Richie Hawtin, Paco Osuna, Umek, Nicole Moudaber, Capriatti to name a few.

In this pack Archila has delivered his trademark sound, featuring complex drum loops that in themselves stand up as full grooves construction kits with full, kick free, percussion and top loop variations. Heavy sub laden bass-lines are in abundance with synth loops and background loops rounding out the music loops folder. One shot samples feature high quality drum hits, vocals, synth stabs, FX and vocals and include pre-programmed soft synth patches for all major formats.

Little Helpers is a conceptual digital label courtesy of Andrew Rasse (a.k.a. Butane) and Sean O'Neal (a.k.a. Someone Else) launched in December 2009. Currently the 3rd most charted label of 2017 on Resident Advisor and reaching a landmark 300th release with Hot Creations’ Jamie Jones no less, Little Helpers concept, music and philosophy has seen them achieve a cornerstone position in the underground scene.