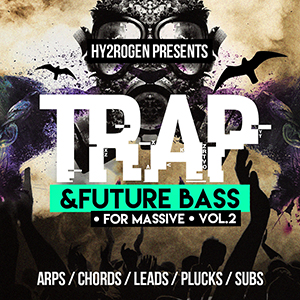 Getting down with speaker-punishing 808 subs, syncopated and LFOed milky chords, mainstage lead sounds going from edm-type screamers to specific trap yonkers, arpeggiated bleeps and breakdown-ready pluck sounds, this preset pack is another one that cannot be missed from a solid producer's arsenal.

What you get is 125 total presets broken down into 10 sub bass presets, 5 ARP presets, 40 chord presets, 40 lead presets and 30 pluck presets.

Some of the sounds feature melody/riff/rhythm lines already programmed which can be altered at your liking.

The presets also come with 4-8 macro-controls to help shape the sounds to fit your track.

Don't let the demo fool you on what these presets can do, there is much more inside!

Attention: The pack contains only arp, bass, chord, lead and pluck presets for NI Massive v1.5 and above.

Other sounds like drums, effects and vocal cuts are not included in the pack. These sounds have been taken from our Trap 2 sample pack.?