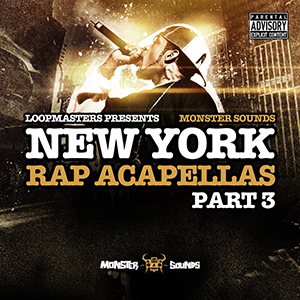 Monster Sounds are very proud to present the third volume of freshest royalty free Rap Acapellas featuring some of the best MC's in NYC!
Many times in the studio you get to the point where to take things to the next level you need a little something special. A great vocal can take the track from being ok to being a remembered as a classic. This is tricky if you don't know any decent MC's or have access to a studio to record them. This is where Monster Sounds Rap acapealla series steps in, Quality vocals right where you need them.
For this installment we are keeping it within the family. Monster Sounds has returned to the mean streets of Brooklyn to work with performer and producer Dan Walker aka NineLives The Cat. As a performer Dan has appeared on many tracks over the years and as part of the amazing art punk outfit "The Deathset" he is signed to Steve Aokis "Dimmak" Label.
For this pack using Dans street knowledge of the NY Scene we have linked up 5 of the Big Apples most talented MC's.
First up we have GDP born and bred on the East Coast. With flair and versatility, GDP brings sarcasm and sincerity in equal measures in his laid back delivery, his flow is tight and his ironic humor shines through.
Next is Presice, having built his following via mix Cds on the discerning streets of Brooklyn he is a Hip-Hop artist whose work ethic, creativity and lyrical style are as key to his style as his love for basketball and vast sneaker collection. His awesome tight high energy vocal delivery is as sharp and cutting as a razor and his lyrical content is totally on point. Presice will blow up anything you put him into.
Thirdly we have the mega creative Harvey. Harvey has taken DIY music producing to a whole new level. He recorded an entire album (secretly) in the Soho Apple Store. He appropriately named this album PHATASS (Price Harvey At The Apple Store Soho). This determination under limited resources earned him praise from Lil' Wayne, Russell Simmons, Chamillionaire, and Talib Kweli Greene as well as numerous features in music and culture publications. His sound is totally unique and we feel brings something special to this vocal pack, adding a totally different stand out sound and lyrical content, hes definitely not an average MC.
Following on we have Roch, having seen action in the Thunder Hut project and Soul Aggression, Roch continues to spit out some of the most energetic and exciting lines we have had on the NY rap series .His fat warm tone and energetic rolling delivery seem to bring the magic touch to any track you drop him into. This is a GOTO vocalist when you need to inject some passion, hype and street smart to a track.
Finally we have Vyle .It's pretty difficult to describe him, you need to trust us on this one, he's uniquely raw and sounds awesome. Growing up on the South side of Chicago Vyle was more interested in cyberpunk culture and comic books you can get a glimpse inside his mind from the lyrical content, its definitely not ordinary. Having hosted mix tapes by Flosstradamus and toured extensively Vyle is definitely one to watch out for.
To give you maximum flexibility we have recorded at 3 key tempos 96, 127 and 140 BPM the pack is split into mainly 2 bar and 4 bar loops so constructing a verse or a hook is easy to do. The rest of the pack is made up from a huge collection of one liners and one shot shouts and hits perfect to loop, mash and twist into dancefloor hype sections.
New York Rap Acapellas is an awesome collection of authentic, original vocal performances by people currently working hard in the Ny music scene. These vocals can be used to bring a bit of NYC to all styles of Dance music, from House, and Drum and Bass to Trap, Dubstep, EDM, Hip Hop , Soul funk or anything else you may want to throw them into.