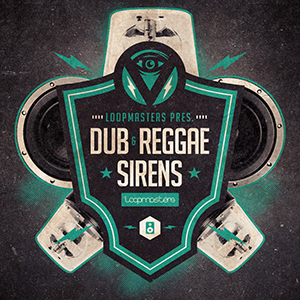 Whoop Whoop it's the sound of the police as Loopmasters turn on the blues and twos for an alarming collection of Dub & Reggae Sirens soaked in feedback delays and space reverbs ready to drop straight into your Dub inspired productions and sets.
This incredible collection features the classic sounds from two of the most sought after Dub Sirens on the market today, alongside a fat collection of sirens created with cool analogue synths such as the Moog Voyager, Sequential Circuits Pro One, Moog Little Phatty, Elektron Analog Keys and digital sources such as the Korg Kaosilator, Patchblocks and Circuit Bent Toys, making it the most comprehensive one stop source of Dub & Reggae sirens sounds you will find today.
Most of the sounds here have been shot through a wide range of analogue and digital delays and effects boxes to capture the true Dub vibe, right out of the box. We have also supplied 87 of the most common sounds as dry versions so you can twist them up yourself. We even have a few real recordings of fog horns and air sirens for good measure.
The Classic NJD Siren is the most highly regarded Dub Siren, known for its deep powerful tones capable of cutting through the biggest of sound systems, it is the exact siren Jah Shaka used in the film "Babylon", on the famous warrior charge scene.
The Roots TS1 MK2 is a much rawer beast but is capable a huge sound palette ranging from Resonant Bells, Alarm Warnings, Noisy Rise and Falls to Electrifying Ray Guns, Attack Pulses and more.
Expect to find 254 Siren Fx including Squelchy Moog Sirens , 8bit Digital Sirens, Circuit Bent Sirens Bomb Alerts, Weather Warnings , Tempo Gated Sirens, Distant Air Raid Sounds, Air horns , Chirps, Dub Beams, Alien Chatters, Straight Tones and all emergency sounds needed to tear up your productions and lure your hapless ravers to the dancefloor
In detail you'll get 514 mb of 24 bit sounds including 40 NJD Sounds, 74 TS1 Sounds, 30 Digital 8 Bit Sounds, 13 Dub Moog Sounds, 11 Kaosilator Sirens, 68 Misc Sirens and 18 Bonus Dub SFX. and 9 Soft Sampler Patches.
If you are looking for authentic Dub FX for your productions check out the demo and test drive the taster pack of sounds then get ready to sample Dub & Reggae Sirens TODAY
NOTE: The Drum Loops and Musical parts in this demo are not included, this is a Siren Sound FX pack only.