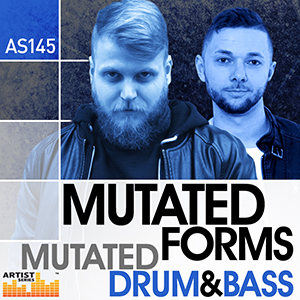 Loopmasters welcome Mutated Forms to our 145th Artist series with a monstrous collection of Rolling Breaks, Smooth Melodies, Nasty Raw Basses and Spine Tingling SFX for DnB producers worldwide.
Mutated Drum & Bass is heavyweight collection of over 800Mb of royalty free DnB samples recorded at tempos between 161 and 180BPM representing over a decade of production skills from Estonia's finest breakbeat artists; expect to find 458 production ready loops and one shot sounds dedicated to the dancefloor.
Aleksandr Jeldsyshev ( Zub ) and Artyom Vlassov ( G - ruff ) aka Mutated Forms started the musical career in 2004 in Estonia originally making music as a hobby but it was not long till there productions started to appear on various Drum & Bass compilation albums. Their first album under the guise of Mutated Forms came on Russian Label Prosvet Records with the title MF Project ? No Limits, an eclectic collection of Jump Up, Liquid Funk and Experimental Drum & Bass of which was well received by the DnB community and critics alike.
The releases came thick and fast until in 2006 UK D&B pioneer and owner of Formation Records DJ SS signed there track “My Feeling" launching Mutated Forms into the mainstream and opening up their productions to an international audience.
Mutated Forms have collaborated with artists such as Netsky, Jenna G, London Electric City and have had support from many of the scenes biggest names such as Bailey, Hype, SS, Kane and Sappo. Their distinct yet individual productions all have the trademark Mutated Forms stamp but their choice of cutting edge samples allow them to mix up styles from liquid and euphoric to straight up dirty funk onto filthy jump up dance floor destroyers, their DJ sets push the boundaries of Techy through to Jump Up with a touch of Funk, Whatever gets the dance floor moving!
In detail expect to find 881Mb of 24Bit 44.1KHz of Loops and one Shot sounds including 41 Bass Loops, 58 Drum Loops, 51 Music Loops, 30 Bass Stabs, 7 Bass Multi Sampled Instruments, 111 Drum One Shots, 5 Synth Stabs, 27 Multi Sampled Synth Instruments, 19 SFX Hits, 20 Vox Shouts, 167 Rex2 Files and 104 Soft Sampler Patches for Kontakt, Halion, Exs24, Nnxt and Sfz formats.
“This sample pack is a representation of the music we've been making these last few years and we tried to make the collection as eclectic as our own productions, so expect to hear everything from Deep Soulful Melodies, Dark, Dirty and Heavy Basslines, Snappy Rolling Breaks and Skippy Groovy Halftime Hip Hop beats at DnB tempos."
Firmly entrenched and supported by the Formation camp Mutated Forms are fast becoming hot property on the international drum and bass circuit. For the first time the guys give producers a sneaky look into their production toolbox make sure you check out the demo track and download the free to use taster samples and get ready to sample Mutated Forms ? Mutated Drum & Bass TODAY!
（From  LOOPMASTERS）