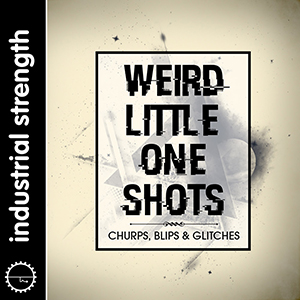 Industrial Strength Samples unleashes Weird Little One Shots, an eccentric set of bugged-out Shots from the twisted chops of producer Adam Pollard aka Multiplier.
Like a pinball machine on multiball freakout, we're releasing the plunger on more than 1,000 One Shots in an arsenal of pings, churps, bleeps, bloops, clicks, pops, crackles, burps, claps, hi bipps, low bipps, vocal snips, and random cuts and glitches. From the kooky to the creepy, the distorted to the digital, this pack embraces all the oddball surprises and alien idiosyncrasies to jolt any sound design project or music track outside the box.
Layer these offbeat, experimental slices into drum and percussion tracks, feature them in patterns, and add ear-catching punctuation marks to amp the intrigue. Go far out in EDM, Techno, Minimal, House, Electro, Breaks, DnB, Trap, Bass Music, Hardcore, Dubstep, and any style between.
This set was meticulously produced by Adam Pollard aka Multiplier. Drawing from diverse influences from Dubstep to Electro, Trap, Big Room and more, the young producer has quickly established himself in the dance music world with an expansive style that continues to shuck boundaries, defy the limits of genre, and capture the imagination of a rising fanbase worldwide.
Headlining shows internationally, Pollard has played alongside and received support from such names as Calvertron, Electrixx, High Rankin, Heartbreak, Le Castle Vania, Crizzly, Nerd Rage, Dani Deahl, SaBBo, Kev Willow, and Essbeedee. With early releases rising on Beatport's highly-respected Secret Weapons chart, Multiplier's debut EP STFU also reached #5 in the Trackitdown Dubstep chart and #10 in the Breaks chart, and his releases have charted in record stores along the way. Catch his original releases on Straight Up! Music, Columns of Knowledge Recordings, Relentik Records, Mash It Up! Cologne, and Bit Rowdy Records.
Pollard's ceaseless energy and dedication to his craft fuels the self-starting fire to shape the sounds of the dance floor. His own label Relentik Records represents the multi-faceted spectrum of electronic music. Catch his Waffle House EP on High Chai Recordings, stacked with bangers and containing elements of 8-bit, Electro, Progressive, and Dubstep.
All the shots you'll find here are short, clean and upfront, presented in nothing less than 44.1 kHz, 24-bit Wav. Plus, they're primed for Native Instruments so you can ramp it up in Battery 4.
Bring on the quirk and get weird. Really. Freakin. Weird.
（From  INDUSTRIAL STRENGTH）