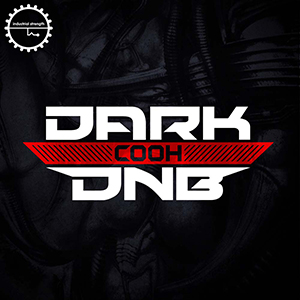 Gear up to traverse the pulsing, savage soundscapes of Dark DnB with this monster pack from Industrial Strength Samples, featuring the singular sounds of Bulgarian wunderkind Ivan Shopov aka Cooh.

Ear-shattering one shots, heavy loops, blasting breakbeats, and bone-crushing bass abound on this raging collection of authentic dark underground grooves. Add a whopping 650 Mb of fresh rhythm to your sonic arsenal, and use these dope sounds to accentuate DnB, Dubstep, Drumstep, Cross Breed, Hardcore and any other electronic bass explorations you which to embark on.

The bass warlord of the Bulgarian DnB underground, as well as being a sought after graphic artist, the prolific Cooh has recorded for such labels as Position Chrome, Prspct, Freak, LB, Dim Mak, Algorithm and Ad Noiseam.

His work has become known internationally through rigorous touring, dominating dance floors from Australia to Hungary. A singular producer of DnB, Dubstep and IDM. Cooh shines thru on Dark DnB, culling the best of his repertoire to deliver a totally ruff and ready to rock sample pack for your production needs.

This pack includes a slew of 24-bit, 44.1 kHz samples, all formatted in Apple Loops, Acid Wav, and Elastic Audio for maximum utility, ready for use with New Battery 4, NI Maschine, and Logic Exs. This blistering pack also features a bad boy collection of Propeller Heads Reason Combinator patches for you to twist and turn. Get Ready!
（From  INDUSTRIAL STRENGTH）