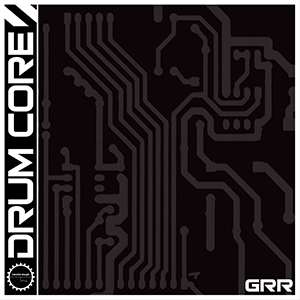 Industrial Strength Records presents a pummeling audio sound set from the outstanding chops of experimental electronic Producer and DJ Grr. Drumcore blazes its fiery trail with the full-on intensity of a thousand anvils plummeting from the edge of space.

This new Crossbreed pack is ready to rip through the underground scene with driving high tempo samples inspired by the most ferocious elements of Hardcore, DnB, and Drumstep, and double-braced with the hybrid frantic force of Frenchcore, Industrial and of course Breakcore.

Make your impact with more than 400 maximum-strength Loops, plus a mad selection of Drum Shots and searing effects you need to break the sound barrier. These 4-bar Loops contain multiple patterns so you can mash them together, create completely new backbeats, dream up new patterns, and glitch out your own mechanical onslaught. The one shots are labeled so you can find the sounds and create your own patterns from scratch with all the sounds you here in the full loops. Not bad hey ? Dnb heads get ready for the madness.

This pack features over 500 one shots all ready for NI Machine. These head ripping shots are also selectively set up in Battery 3, Logic EXS and Kontakt 5. The one shots consist of drums hits, Fx, bass bangs, noise fills and pretty much everything you here in the demo. No stone was left unturned on this ruff and ready pack.

Italian Producer Grr has made a name for himself by steering his drive into experimental styles and newfound sounds. Currently based in Berlin, the man of many talents emerged as master of the groovebox, leaving his mark on Hardcore, Industrial, and Techno over more than a decade of experience in the European rave and electronic scenes.

Subsequently Grr honed modern production techniques, applying his ears to Breakcore and his hybridizations of Industrial and Hardcore to create a unique and constantly evolving style that can be heard on numerous compilations, splits, and solo releases through Industrial Strength Records Mechanical Brain Limited, Praxis' Sub/Version imprint, Sociopath Recordings, RXTNZ, Illphabetik, and Ruszud.

Drumcore's 24-bit, 44.1 kHz samples bring uncompromised audio warfare into any DAW. All the loops and one shots are keyed at 180 BPM so you can dive right into the thick of em. Choose from either Aiff Loops or Wav. They are both included in the Zip main pack...

Drumcore packs the power to rift open a wormhole of hyperspeed hits and maxed-out frequencies. Get ready to let loose and hold on for the ride as ISR brings the true underground sounds of now into your studio.
（From  INDUSTRIAL STRENGTH）