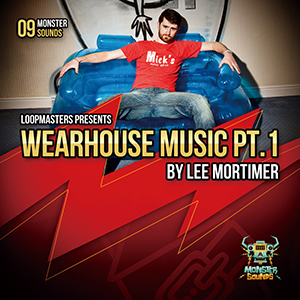 "Anything heavy, electronic and above all else, BIG will make it into my sets!" states Mr. Mortimer and we can vouch that this is 100% true. And he backs that claim up by handing in the first edition of his mighty 'Wearhouse Music Sessions' on Monster Sounds.

"Lee's been pushing this sound since the beginning - whether he is spinning or producing, there's not many people who can touch him" - Dave 'Switch' Taylor

As well as his sterling efforts on the wheels of steel he has also made a name for himself as a producer par excellence with tracks signed to Fool's Gold, Dubsided, CR2 and Made to Play. He's also provided remixes for bands such as Franz Ferdinand, The Futureheads and Bombay Bicycle Club to name but a few. He has also re-jigged tunes by DJ Zinc, Dave Spoon & Pete Tong and Foamo to spine tingling effect. Many of these mixes have also appeared on compilations by Claude Von Stroke, Plump DJs and Kissy Sell Out. It seems Lee has a knack for lifting already banging tunes up a notch into the upper echelons of dance floor hedonism!

"Lee was one of the first we contacted and with whom we started sharing tracks. He was doing some real great fresh sounding tunes and is definitely still doing it!" - Bot from Crookers

"Lee Mortimer is one of the UK's quickest-rising starts in electronic music, pumping out tracks at an alarming rate. Watch out!" - A-Trak

As well as his Djing and world acclaimed productions Lee also runs his own record label titled 'Wearhouse Music' and where the title of this pack derived its name from. He has released a number of Black Noise EP's on this label and has collaborated alongside them and he also features on the forthcoming Aquasky album 'Raise The Devil' alongside Daddy Freddy. It was inevitable that Monster Sounds would track him down and assist in getting some of the sounds, vibes and ideas from the Mortimer Studios onto a sample pack and shared with up and coming producers as well as many a professional. And what a cracking pack it is!!!
（From  MONSTER SOUNDS）