This title from the Loopmasters Origin series comprises a total of 650MB of sample data in various different sample formats. All the original recordings are in the 120-150bpm range and are presented at 16-bit/44.1kHz resolution. The CD liner notes suggest the contents are suitable for anything from rock to indie, blues, goth, hip-hop, or metal. Having auditioned the loops, I'm less convinced about the last two genres. While there are some loops that might fit those styles, Raw Power is not the most obvious collection for fans of Eminem or Linkin Park. However, I would add punk (perhaps with a nostalgic '70s edge) and grunge to this list.

The loops are split into five main folders: New York Underground, Alternative USA, England's Dreaming, Artskool, and New Wave, with subfolders for drum (patterns and fills), guitar, bass, and synth loops. Within each main folder, the loops are all presented at a single tempo, and the collections within each folder contain loops that would obviously work well together in terms of style. Amongst the bass and guitar loops, there were some obvious groups, with four or five related loops that contained similar phrases and/or styles of playing, and this made it easily to build a coherent musical section with enough variability to sound 'real' rather than obviously 'looped'. It was perhaps a shame that this process wasn't more fully implemented within the drum loops - while these certainly contain plenty of excellent material, both in terms of performance and recording quality, there is less in the way of related loops. That said, it is not too difficult to build the basics of a complete drum track by mixing and matching within and between the various folders. If you need lots of flexibility here, you're likely to find yourself reaching for your favourite beat-slicing software.

In piecing together some brief demos, I found myself thinking of a number of specific bands. These would include some of the 'inspirations' listed on the liner notes - the Sex Pistols, Blondie, and Nirvana - but also other bands such as The Strokes and Queens Of The Stone Age. Much of this was down to the guitar and bass loops - while these covered all sorts of styles and sounds (clean and overdriven), the playing was grungy and not too technical. This is a compliment not a criticism - they're just right for that punk/indie/grunge vibe.

If there is a minor downside to the collection, it is that perhaps the library tries to cover a little too much musical ground in a single CD - other 'inspirations' listed on the liner notes include Beck, Oasis, The Pixies, Blur, Muse, Radiohead, The Beatles, and Jimi Hendrix! Even with more than 900 WAV loops, this is a pretty diverse musical palette to cater for. Still, if you like your rock to have character and a rough edge or two, Raw Power represents good value for money. 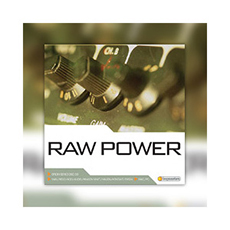