Sound On Sound誌（UK)レビュー内容（英語）
These days, if your sample library's going to be a success, it seems you've got to release it with a virtual-instrument front-end. Analogue-synth fanatic and long-standing sample-library producer Ian Boddy does not disappoint with his latest creation... Zero G's Morphology is one of the new breed of software instruments that combines a large sample library with a software-instrument front-end, and as with many of these new-style libraries, the playback engine in this instance is Native Instruments' Kompakt. The man behind Morphology is none other than Ian Boddy, long-standing UK electronic musician, analogue-synth fanatic, and sample-library creator (Ian was previously responsible for Zero G's Ambient 1 & 2, Malice In Wonderland and Dream Zone). As its name suggests, Morphology provides evolving and morphing soundscapes and dreamy-sounding synths, but its library of original 24-bit 44.1kHz sampled sounds, which is over three Gigabytes in size, goes rather further than that, spanning both beautiful-sounding and gritty industrial sounds. It also includes some of the most generously sampled analogue synth oscillators around - reasonably long notes are provided so that the notes in a chord beat and breathe just like they do on a real analogue instrument. If comparisons had to be made, I'd say those who like the Spectrasonics Atmosphere and Distorted Reality products would also like Morphology, but they are still very different in approach.

The Kompakt instrument is worth a closer look, as it's not simply a sample-playback front-end for the library. It allows up to eight 'instruments' to be used at once within a Multi, and as you'd expect from this synth-like architecture, each Instrument can then be assigned to any MIDI channel, panned independently, and can have a key-range assigned to it. Morphology also supports separate outputs for each instrument within a Multi on those host software packages that support multiple output routing.

This architecture makes it possible to set up layers and key-splits, and the sounds can be further processed using both instrument-specific and global processing (at 32-bit resolution). There are also more advanced tricks you can do, such as loading two different-sounding instruments on the same MIDI channel and then arranging the mod wheel to crossfade between them, by setting the Mod Wheel to control one instrument with positive volume and the other with negative volume.

The structure of the Kompakt instrument is much like that of a traditional analogue synth, with level envelopes (there are three envelopes and four LFOs), multi-mode resonant filters, portamento and modulation, but there are also global effects (reverb, chorus and delay) and a global EQ/filter. Because some of the samples are rather large, the Kompakt instrument also offers direct-from-disk (DFD) streaming to ease the load on your computer's RAM (albeit at the expense of increased hard drive activity). Apparently all the programming was carried out with the samples loaded into RAM. Mac G5 dual-processor users need to download the latest DFD extension from the Zero G web site (see www.zero-g.co.uk/index.cfm?articleid=797), as the one supplied with the package wasn't dual-processor compatible, and the result was that I got a lot of clicks and pops in the audio when streaming from disk. However, updating to the new DFD extension cured this immediately.

Currently, Morphology is compatible with various Windows plug-in formats (VST 2.0, Dxi 2, ASIO, MME, Direct Sound and RTAS), and the major Mac OS 9 formats (VST 2.0, ASIO, Sound Manager, OMS and RTAS). OS X users are not left out, with support provided for Audio Units, Core Audio and RTAS formats. The Mac OS X formats weren't available on the install disk at the time of review, but updates were available for download via Native Instruments' web site, and it was the AU version that I used for this review. However, Morphology can also be used as a stand-alone software instrument, which is very useful if you wish to use it in live performance. Authorisation is via a challenge-and-response system hosted by the Native Instruments web site.

As we've now come to expect from plug-in instruments, Morphology offers complete MIDI automation and control of parameters, and new instrument settings or Multis can be stored in the usual way. The memory size in Megabytes required by each instrument is shown in the Patch List, and nearly all the instruments load with a default polyphony of 32 notes, apart from those sounds in the Synths sub-folder marked as Monophonic. All instruments (except the basic waveform templates) have a key parameter assigned to the Modulation Wheel, though you can of course change this if you like prior to resaving the instrument.

Some of the 'Noise FX' instruments use templates comprising two noise groups each, so these use two notes of polyphony for each note played. As with any software instrument, the CPU load increases along with polyphony, and also with the amount of processing being used. For example, using the included reverb will eat up more CPU power than not using it.

According to the documentation, the majority of the samples are referenced to C3 as the root key, though there are some backgrounds and textures that are melodies in themselves. There are also weird detuned or pitch-processed sounds where the concept of tuning is somewhat vague, and not wholly appropriate! Some of the more melodic loops were contributed by Markus Reuter and are often not in the key of C, so you may need to refer to the extra on-line documentation if your musical instincts aren't enough. To help out, some of these melodic textures include note and scale names in their titles to act as clues.

The Virtual Synth A significant element of Morphology is its virtual synth section, which is based on sampling individual notes (every minor third) from a real analogue instrument for a longer than usual period of time to capture the subtle pitch drifts and other nuances. These are presented as raw VCO samples which are then shaped using the envelope modulation and filter arsenal of the Kompakt front end. There are six waveform types (Triangle, Triangular Sawtooth, Sawtooth, Square, Wide Rectangular and Narrow Rectangular) with a loop length of about 10 seconds per sample. This equates to almost 50MB of sample data spread over 35 different note samples per waveform type. However, knowing that some users will have machines that find this heavy going, 'Lite' versions are also provided with fewer samples, and these take only around a third of the memory.

The Sounds Morphology's instruments are arranged by category, and most of the categories are divided into further sub-categories. The main categories (the content of which is fairly self-explanatory) are 'Atmospheres', 'Drones', 'FX', 'Harmonic Loops', 'Industrial', 'Pads & Synths', 'Virtual Synths' and 'Voices'. Each of the sub-categories typically contains between six and a dozen instruments, though where there are no sub-categories, there tend to be many more instruments - there are over 30 synth pads, for instance. With the exception of the 'Industrial' and 'FX' categories, most of the sounds on offer are either analogue-sounding and solid or atmospheric and gentle, but Ian Boddy wouldn't be who he is if there wasn't the occasional 'visit to the dentist' example of sonic terrorism in there somewhere! My favourites were the 'Harmonic Loops' and 'Atmospheres' sections, though the 'Virtual Synth' samples sound great played as chords. The 'Harmonic Loops' section contains some wonderful processed new-age style beds that could almost be used as minimalist tracks on their own (especially in the 'Calm' and 'Beauty' sub-categories), but at the same time, they also integrate well with other sounds and instruments. If you like Wavestations and similar synths, you should find a lot to like here.

While it may not take too long to trawl through the sounds and identify your favourites, the real joy of Morphology is the simple way in which you can tweak the synth-like controls for each instrument to bend it to your will, or layer different sounds to create something new. In short, it was easy enough to use, although I found the text used on some of the Kompakt menus to be on the small side, and the menus had a habit of slipping out of my grasp as I was trying to navigate through them. However, in its favour, there is only one screen to deal with, so I guess there have to be some compromises.

Conclusions Kompakt provides a fairly straightforward but nevertheless very versatile front end for the playback of sample libraries of this kind, and while the 3GB Morphology core sample library is impressive, it is even more impressive to be able to edit the sounds so easily. Morphology should please anyone who's into realistic-sounding analogue synths or evolving textures, and even if you already have Spectrasonics' Atmosphere, it offers a different take on the genre. All in all, this is a pretty impressive workshop of weirdness that manages to be both different and musically useful. 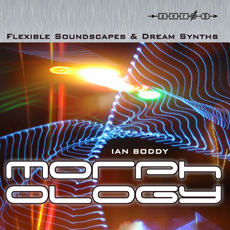