Zero G continues its range of lower-priced 'Pure' titles with this collection of hip-hop samples. The audio CD kicks off with nine tracks of four-bar drum loops (36 in total) with tempos ranging between 75 and 160bpm - and very good they are too. The kicks boom, the snares snap, and nothing is left too clean and clinical. Many of the loops have an edited 'cut-up' feel, and the resulting patterns are very authentic and useable. But providing only 36 loops seemed a little tight and I was left wanting more.

The next six tracks are taken up with 25 scratch loops, and since I've been critical in the past of hip-hop collections that have omitted scratching, which is, after all, a fundamental part of hip-hop music and culture, it's good to see some here. As for the scratches themselves, they are well executed and recorded, if a touch predictable in places. On a personal note I'd roll some of the bass off them before use, as there tends to be a lot of stray frequencies flying about as the record gets abused.

Following on from the turntable trickery, we have 10 tracks of bass loops split between electric and synth. All the riffs are well played, as you'd expect, but a few of the electric samples seem a touch too busy for my taste, and the majority of the synth bass lines have a distinct house and techno flavour that might not appeal to everyone.

Hits and stabs come next (58 in total) and these are very good with a varied mix of sources (horns, guitar and so on) and the amount of well-used/famous cliche cut to a minimum. These are followed by four tracks of assorted atmospheres, and again, these drones and washes seem more suited for inclusion in more mainstream dance compositions than backing for a hip-hop track.

The collection is rounded off by a large selection (13 tracks) of assorted Rhodes samples. Consisting of over 80 sounds divided into chords and riffs, these samples sound great - but why so many? Although the Rhodes sound is undeniably a classic one, surely this space could have been used more effectively and filled with more hip-hop specific samples... Extra beats, for example?

Pure Hip-Hop is a collection of two halves: when it gets it right, as in the excellent drum loops, for example, it's spot on, both in terms of authenticity and usefulness. But with an unnecessarily large Rhodes section taking up a third of the total audio, Pure Hip-Hop doesn't play to its strengths, even at its lower price tag. 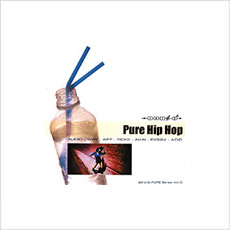