「RETURN TO THE PLANET OF THE BREAKS」のレビュー

英国サウンド・オン・サウンド誌FIVE STARアワード受賞
Sound On Sound誌（UK)レビュー内容（英語）
Rawfunkindirtyassboogiebeats! That's a hell of a word to kick off a press release, but it's exactly how Zero-G describe the third volume in their award-winning Planet of the Breaks series. Surprisingly, the man behind the first two CDs, Shawn Lee, is absent, and replacing him on the sticks for this collection is Emre Ramazanoglu. A session drummer/programmer who has worked with the likes of Mekon, Maxim and the Sneaker Pimps, and a composer in his own right, Emre has some big shoes to step into.

Spread over two discs (one audio and one containing all the first disc's loops as WAV, REX and Recycle files), Return serves up 76 tracks of live beats ranging from 57 to 169 bpm (though one loops pogos in at 194 bpm). In common with the previous Breaks volumes, the format is a simple one. Each track consists of three mixes of the same loop: a dry mix, an ambient mix (which includes any external effects) and a full mix of the two together.

Enough background - you want to know how the loops sound. Bloody good actually. The kit used is well chosen and the sound quality is excellent, ranging from crisp and clean to downright dirty in all the right places. The standard of playing is extremely high, with each beat given room to evolve and take on its own vibe. Emre's versatile style flows from sparse, laid-back grooves, through some truly heavy hip-hop loops, to faster, funkier patterns that would complement most modern dance genres.

The processing and effects added to the ambient mixes are good (although hardly subtle in places), and include some nice reverbs and filtering. The addition of these 'ambient only' versions allows the creation of personalised mixes of the dry and effected loops to fit all tastes. I must also mention the well-presented and informative booklet - a nice touch.

I'll admit that, as one of the many fans of the previous CDs (and Shawn Lee's impressive playing), I wondered if Zero-G had taken a risk in changing such a popular format. In fact, Ramazanoglu has risen to the challenge and has produced a fantastic selection of well-played grooves that manage to keep their own identity while remaining completely usable. For me, it's the crisp, sparsely funky, lower-tempo grooves that stand out.

It's true that no individual drum hits are included here, which might put off any producers who like to have ultimate control of their loops, but that's not really the point of this collection. If you are a user or lover of funky, fresh drum loops played with bags of character and groove, Retrun to the Planet of the Breaks is for you. A worthy addition to an outstanding series. Rawfunkindirtyassboogiebeats? You'd best believe it. 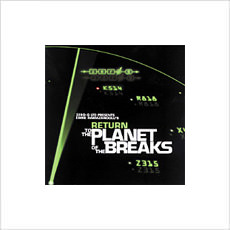