Following on from the superlative Total House and Total Drum And Bass, the third part of Zero-G's soundware trilogy certainly has a lot to live up to.

In keeping with its older siblings, Total Hip Hop comes on three CDs; disc one takes care of all of the drum loops, disc two handes all of the instrument, vocal and FX sounds while disc three contains all of the data from discs one and two, stored as WAV files.

House and drum and bass music tempos are generally clearly defined and live within certain narrow margins with hip-hop. However, the tempo boundaries on this CD are slightly more blurred. The drum loops on disc one range from 65 all the way up to 125bpm. It's not just the tempo that can be elastic either, as the sheer variety and colour of the loops demonstrates. This gives the distinct impression that virtually any form of music could be considered 'hip-hopable' as long as there's a drum loop in there somewhere and the bloke at the front has his baseball cap rotated far enough.

Luckily, the quality of the programming is what you would expect if you have heard the other two releases. Regarding the depth of sound, musicality and sheer usefulness, the Zero-G name on the cover denotes that these loops will not disappoint.

Disc two kicks off with a huge number of bass licks. So large is this collection that it takes up the first 43 tracks. Acoustic, electric and synth basses are all covered and, in each case, you get a good number of multisamples, as well as the riffs, which generally work very well. One pleasant surprise is the Brass section (tracks 44-52) which includes some wonderful live horn riffs alongside some authentic and expertly performed solo sax and trumpet lines. The Guitar section is also worthy of note, featuring all manner of acoustic and electric sounds. Although there are a few riffs here, the focus is mainly on electric guitar effects and single notes. These cover a fairly broad spectrum of tones and, as such, would work nicely over a wide range of musical styles.

The synth section features both pads and multisamples but it's the 'Strings For Films' samples that mark a real high point. These contain some fabulous live string section recordings of atmospheric and highly 'soundtracky' chord progressions, followed by some short clarinet samples, flutes and a gimmicky 'Silly and Crazy' section which contains ultra short snatches of exactly the type of noises you'd expect.

There are a few more 'effects' tracks and some interesting (if slightly unoriginal) 'scratchy' spoken vocal sounds, before proceedings are rounded off with a collection of spare drum loops.

Considering this disc's sampling pedigree I would have loved to award it five stars but I find that I just can't do it. Whilst the range of sounds is both impressive and highly usable, there is much here that simply isn't hip-hop (clarinets, ethnic flutes, thrash metal guitars and so on).

The drums are the strongest part of this release and, although it offers a credible and often inspirational sampling journey, you can't help feeling that Total Hip Hop is a Return Of The Jedi in sampling form. Still, great value for money though. 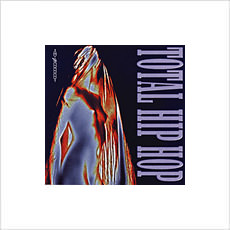