「CUCKOOLAND 2 GHOST IN THE MACHINE」のレビュー

In the race to keep coming up with new and innovative forms of sample CD, would-be producers could do a lot worse than take a leaf out of Simon Mills' and Ian Sanderson's book. This follow-up from the weird and wonderful Cuckooland Vol 1: Unhinged takes the theme of menacing and dark ambiences even further. It's stuffed full of the most desolate, haunting and downright sinister textural ambiences you've ever heard, taking the form of 30-second stereo tracks which, although they evolve and change slightly over the course of the CD, remain absolutely relentless in their ability to make you feel at best unsettled and at worst frightened to death.

Try to imagine an offbeat fusion of atonal sounds melted down with a vast number of bizarre sound effects; sprinkle in a couple of audio clips from your favourite cheesy B-movie, add some radio static, mix with a misspent youth and allow to simmer in a very large Lexicon reverb for a couple of days. You're almost in the right frame of mind to deal with this CD. If, however, you're looking for some nice drum loops to use for a Boyzone track, I'm afraid you've come to the wrong place.

The 'textures' make good use of the stereo field, and effects-wise you probably won't hear a CD this year that puts so much emphasis on imaginative use of outboard gear. One drawback of this approach is that pushing the limits of sonic possibilities has produced more than a few 'textures' where there is so much bass that I couldn't stop my system from distorting -- not that this really bothered me, given the context of the subject matter (listen to it and you'll understand). Also it's worth noting that where Volume 1 contained a few drum loops and grooves, this CD is given over entirely to ambient textures.

It would be narrow-minded to assume that this CD is aimed purely at ambient or dance music producers, because I can see its sounds putting the frighteners on all sorts of audiences, not least of all in TV, radio and film. This is the kind of release that would make William S Burroughs run screaming for a nice cup of camomile tea and an episode of Neighbours. 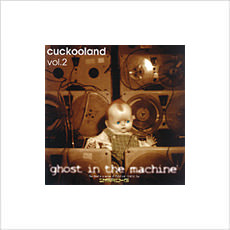