There are many elements that can make a track or piece of music considered to be "epic". It could come from an extended arrangement whereby musical ideas are subtly explored, slowly building to an exciting climax. Alternatively, it could come from some big-style drums. If this is an element you require in your music, you will be in cinematic heaven with this huge new sample pack from Big Fish Audio.

Epic Drums is a collection of 40 thrilling cinematic drum and rhythm construction kits that will be ideal for composers of film, adverts and particularly OTT television programmes. The 2.7GB library comes on two DVDs in order to accommodate the Apple Loops, ACIDized WAV, RMX and REX formats. All the expertly played instruments have been recorded in high-quality 24-bit audio, including Japanese taikos, orchestral percussion, massive toms, ethnic drums and effects to name but a few. While most of the performances are fast-paced with a full-on sound, there are also some more subtle percussion rhythms that could be used to build tension. There is a huge variety in tempo (from 65-185BPM) and seven of the construction kits feature alternative time signatures, including 7/8 and 5/4 rhythms.

Overall, the pack has a big Hollywood sound - just add a heroic trumpet and you've got a classic Hans Zimmer military scene. What's more, the pack doubles as an extensive drum hit and percussion loop library.

Our only criticism is that in an effort to make everything sound so big, the reverb might have been overdone, which reduces options at the mixing stage. 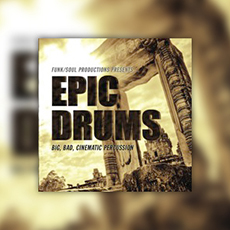