英国サウンド・オン・サウンド誌FIVE STARアワード受賞
Sound On Sound誌（UK)レビュー内容（英語）
Zero-G's Ambiosis is the latest offering from analogue synth guru and sample producer Ian Boddy, and it comprises a collection of soundscape-style samples, in both Acidised WAV and Apple Loops formats. Some 300MB of sample data is provided in each format and the 140 or so loops are presented at 16-bit, 44.1kHz resoluion.

The loops are fairly evenly spread across seven themed folders (Analogue, Atmospheres, Dar, Light, Spacey, Vintage and Weird) and the majority of the individual loops are between 15 and 25 seconds long. The material is dominated by soundscapes or atmospheres ? sounds that steadily evolve. However, there's a small number of loops that are more obviously musical in nature, such as the wonderfully named 'A La Jam Jars CFG' and 'Plucked Heaven CDFGA' from the Atmospheres and Light folders respectively. The range of moods varies. There's a good smattering of gentle and soothing - for example, some loops from the Light folder ('Reflective CEb' or 'Velvet Trems CMin') - but, equally, there's plenty to raise the hairs on the back of your neck in a darkened room, especially in the Dark folder. As you might expect, the Spacey folder contains a collection of suitably sci-fi loops (bleeps, bloops and soft metallic drones), while the Vintage folder uses what seem to be some fairly simple sine-wave-type sources to create sound effects that are straight out of a scary 1970s episode of Dr Who.

If you work in trance or ambient styles, this collection ought to have something to offer from a purely musical perspective. However, I suspect the most obvious home for Ambiosis is with film or TV composers and sound designers. There are plenty of loops that could form the basis of an atmospheric soundbed - part music and part sound design - and that would sit under footage from Alien-style sci-fi through to out-and-out horror. As with many sample libraries, the terms of the license do not allow the individual loops to be used in isolation (they must at least be layered with another sound of some sort), but many of these loops would not need much more accompaniment in a music-to-picture context.

There are a number of good 'scary soundscape' libraries on the market so Ambiosis doesn't really break any new dramatic ground. But the quality of the sounds is excellent and the majority of the loops contain plenty of variation. Given that the sounds could work so well for film and TV applications, it is surprising that some of the loops are perhaps not just a little longer, but this comment aside, Ambiosis is great value (particularly the download) and would be worth adding to the collection of an budding media composer. 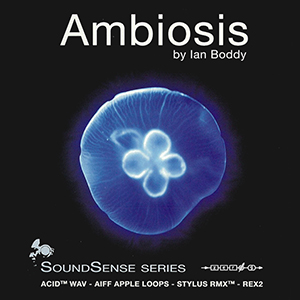