"One look at the artwork for Zero-G's Kocktail Kollection will tell you that this is not your usual sample library. I spent a happy, if somewhat bizarre, couple of hours experimenting with the 1.3GB of Acidised WAV files using Acid Pro 6. The sub-title for the collection is 'Fabulous Lounge Library' and Zero-G suggest that it is intended to offer an authentic slice of late '50s and early '60s 'lounge' music. They're also keen to point out that the contents include huge dollops of cheesy sounds, created with instruments and effects processing that is true to the era, albeit recorded in pristine 24-bit digital audio.

The material is organised into a number of sections. A folder containing 20 construction-kit sub-folders forms the bulk of the material (approximately 1GB). The structure of each kit is interesting, in that the many of them include related loops to create more than one musical section. For example, the Astro Lounge Mixes kit ? Which is a melting pot of cheesy organ, tribal hip-hop rhythms and the odd vocal hit - contains five different subsets of loops and, while each subset might only be based on single drum, bass and organ loops, the subsets can easily be chained together to form a complete musical piece. The kits are an eclectic mix of light jazz (for example, Multi Guitar Swing), party music lifted from '60s London (such as Flutes and Swingers), cliched Latin pieces (Ala Brazil Mixes) and comedy music (the glorious Welk Lounge!), along with the odd Trip-Hop influence thrown in for good measure. Weird, certainly cheesy, but also quite wonderful, in a tacky sort of way.

Aside from the construction kits, the rest of the library consists of various groups of loops along with some one-shot samples. For example, there are sub-folders titled '70s Sequencer Synth Lines' and 'Vintage Cheesy Lix'. The former sound like bleeps and bloops from one of those 'tennis' computer games that you used to plug into a black and white TV set many years ago, while the latter sounds like the members of ELP while they were still in nappies. There are also various sub-folders of rhythmic loops, some of which are fairly straight drum loops, while others are more quirky and feature non-standard instrumentation (for example, the wonderful 'Adrenalinn 2fers' folder, which features a combination of Adrenalinn II and guitar). Throw in the various folders of hits, vocal samples and other assorted weirdness and Kocktail Kollection certainly provides plenty of raw ammunition.

Given the musical nature of the material, I would guess that Kocktail Kollection will attract quite a specialist audience. Most obviously, I could see this library appealing to media composers who have to cover a wide range of musical bases at the drop of a hat. It might also have something to offer for hip-hop producers who have a sense of humour in their music. Scary though it might sound, this is also the material of the novelty record, and at one point, I somehow found myself imagining Peter Kay singing over one of the construction hits. While it might be of minority interest, Kocktail Kollection is extremely well done and hugely entertaining, and if you need some retro kitsch in your musical arsenal, then this is a very good place to start." 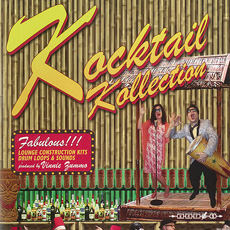