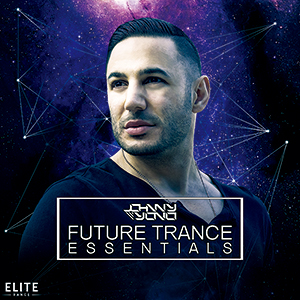 
An artist in every sense of the word, Johnny Yono brings all the passion and charisma that great musicians are made of. Born and raised in the suburbs outside of Detroit, Michigan Johnny led a very active upbringing, dabbling in everything from ice hockey to playing drums in rock bands before pursuing an acting career.

Following his high school years, he was drawn in to Motor City's rave scene and through Detroit's legendary underground dance culture, Johnny's love for electronic music began to blossom. At the time however, acting was Johnny's primary focus and in his early twenties, he set out to Los Angeles to pursue the grand dream of making it on the big screen. Johnny landed numerous roles in TV shows and independent films and managed to keep himself afloat but, continued to indulge in LA's ever-growing electronic music industry.

Having been inspired by Armin Van Buuren, Paul Van Dyk, Sasha & Digweed and many more, Johnny could no longer ignore his true calling. He assembled a small studio and began producing dance music. After experimenting with a variety of sounds, he finally planted himself in the realm of Trance and has remained ever since. Turning heads with his breakout single, 'Fairfax', Johnny established himself as a name to watch out for after signing with UK's powerhouse Trance label, Enhanced Recordings.

The track received massive support from many artists including Armin van Buuren on 'A State Of Trance' and Markus Schulz on 'Global DJ Broadcast' where it was named the 'Global Selection'. Following the aftermath of 'Fairfax', Johnny continued a streak of releasing quality Dance tracks ever since. From the energetic, Tech-Trance monster 'The Machine' (with Juventa) to his numerous classics on Lange Recordings such as 'Orion' and 'Exodus' and flexing his versatility with his debut 138 BPM single, 'Pulverize', Johnny has established himself as one of the genre's brightest up and coming talents.

Over the recent years, he's made his mark on renown industry imprints such as Armada Music, Euphonic Records, Garuda Music, Damaged Records and Perfecto Records, where he not only remixed Paul Oakenfold's covers of the classics, 'Barber's Adagio For Strings' and 'Hold That Sucker Down' but, also released his first EP, 'Poison Whispers' which received numerous plays from Armin van Buuren on 'A State Of Trance' as well as support from Ferry Corsten, Mark Sherry, Lange, Andy Moor, Simon Patterson and many others.

As a DJ, Johnny has shared the stage with many key players on the forefront of Trance including Dash Berlin, Ferry Corsten, Aly & Fila, Paul Oakenfold, Andrew Rayel, W&W, Cosmic Gate, Lange, Omnia, Kyau & Albert, Solarstone, Alex M.O.R.P.H., Jordan Suckley, Photographer and more. He's no doubt among the most promising rising stars in Trance music today and certainly one to keep on your radar in the coming years. You can catch his monthly radio show, 'White Light Sessions' every 2nd Tuesday of the month on Digitally Imported (DI.FM).

Please use Spire v1.1.14 or higher. Keep your software legal and up-to-date to avoid any issues when loading your new presets.