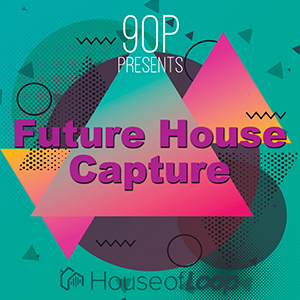 Many speculate as to what the future brings and foreshadow trends along with what life might be like then. In the movie, "The Green Slime" and "The Fifth Element" future music was a topic or in the case of "The Green Slime" it was the soundtrack. Today as of 2018 we have artists that incorporate new ideas and perhaps progressive aspects into their music, which help define what we consider future sound, currently.

Catching one's attention is pivotal for being an artist or creator, of music or in any medium really. If that is something that You are having trouble with, here is the "Future House Capture" pack to assist with that. You may have heard of the artist, 9OP from France. This artist / Nino Pecoraro is from Annecy and deals with sounds that are trademark of the current Future sound, Trap and Hip Hop.

- Look here, this pack contains these spaced-out loops at 122bpm:

3 drum loops that bring the listener down-to-Earth and allows them to hear some familiar parts as well.
40 melo or melodic parts that bring the more moody post-modern kind of feel to the pack.
The somewhat faster tempos lead the music to be not as calm at 124bpm:

3 drum loops that allow for an in-between from the slower to slightly more up-beat.
40 melo parts that are are bit more on the fast-paced more "dance inducing" side and can be used to make the music fluctuate a bit more.
Even still there for those that want more "oomph" and still not too much, there are loops at 126bpm:

3 drum samples that sit in the threshold of being in slower music and still can be used as a build-up part.
40 parts that are more melodic and can again, be used in slow transitions and also for more dance parts.
Getting into the more bumping club and faster dance parts there are the loops at 128bpm:

3 drum samples that allow for more bumping and energy, but still can be used to transition to the last speed.
40 melo parts that can flow with the faster drum parts and still give some leeway.
Lastly, this tempo is the fastest in the pack and can lend to the most energetic and "dance oriented" music at 130bpm:

3 samples of drums that really get the part going and tops o? the max bpm in this pack.
40 melo parts that could be utilized as contrast with the slower and tops of the samples in terms of speed
We may not be able to predict the future, but there is more to this pack! Additionally there are:

20 bass shots to allow diversity, 20 clap shots to get those joints in motion, 20 crash shots to tie the works together,
20 hi-hat shots to bring those bodies to motion, 20 kick shots, 10 rev crash shots to catch the attention of the crowd,
20 ride shots for something more subtle than a crash, 20 rim shots to create segments and nuances,
20 rise shots good for segmenting, 20 snare shots to add emphasis, 20 synth shots characteristic of the pack, 20 tom shots for suspense, and lastly 20 voice shots to really capture your audience
Let this pack capture the essence of, Future House, much like the works of the artist, 9O P, for you today.
（From  HOUSE OF LOOP）