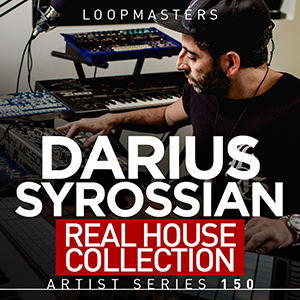 Loopmasters are proud to present Darius Syrossian's Real House Collection - an essential selection of House grooves and pumping rhythms from one of the industries most dedicated DJs and producers. Keep the dancefloor bouncing into the early hours with Loopmasters hottest new House release!
Darius moved to the UK aged 14 and his fascination with electronic music has never waned, having initially been infected by its futuristic lure at an underground party back in 1991. Taking formative influences from New York, Detroit and Chicago masters such as Kenny Dope, Danny Tenaglia, Derrick May, DJ Sneak and Carl Craig, a pure and unadulterated house sound has always been Darius' pre-occupation in place of passing fads or zeitgeist defining trends.
The last few years have been a blur to say the least. Tirelessly touring, remixing, producing as well as taking on new musical commitments has seen Darius catapulted from 'the worker's champion' in Ibiza to an international brand that is a symbol of non-conformist DJing and a musical pigeon hole destroyer all rolled into one.
Darius' success in Ibiza over recent years saw him become resident at Viva Warriors teaming up with the Sankeys brand as musical director which quickly became one of the best parties on the island. This residency won Darius DJ Magazine's Best of British award for best resident DJ of 2014.
2015 is proving to be another huge year for Darius, spreading his sound around the world and performing at pretty much every major festival across the globe. His newest residency Do Not Sleep at Vista alongside his brothers in arms Sidney Charles & Sante became one of the summer of 2015's success stories. Also 2015 saw him at Hyte Amnesia & a final one off sell out party at Legendary Space Ibiza.
With New Productions from Darius forthcoming on DJ Sneak's 'I'm a house gangster' label, Sante's Avotre label, not to mention the launch of his own brand new record label, DO NOT SLEEP, one thing is for certain, Darius hasn't broken the mould of what a house & techno DJ should be, he was cast from the same mould like the scene's forefathers and is most definitely a safe pair of hands to carry it on...
Darius brings his own flavour and approach to this particular pack, offering a host of jackin' House Hits and Loops up to 8 Bars long - giving you versatility and depth to your Productions. The included Music Loops are hugely expansive, from classic Rhodes Organs to vintage Arps to deep-down swinging Sub Bass. Focused around 123-124BPM the pack is optimally suited to Deep House, Funky House, Tribal House, Progressive House or even Detroit Techno - wherever you need a groove!
In detail expect to find 268 files including: 142 Wav Loops - 34 Bass Loops, 60 Drum Loops (19 Full Loops and 41 Top Loops), 41 Music Loops and 7 FX Loops. Also included are 126 Single Hit Wavs - 76 Drum Hits (14 Claps, 30 Hats, 19 Kicks, 5 Rims and 8 Snares) and 20 Synth Hits. There are 10 Bass Multi-Sampled instruments, and 10 pre-made Drum kits. As if that wasn't enough, we have included 142 Apple Loops, 168 Rex2 Loops and 45 ready to be loaded Soft Sampler Patches for NNXT, Halion, Sfz, Kontakt and Esx24.
Darius Syrossian has a passion for House music that only people who do it for the love of the music are able to possess. In his own words: "I'm into the scene because I LOVE THE MUSIC, not like a lot of people who are into the music because they LOVE THE SCENE. It's only about the music for me, and that's all that matters!" Listen to the demos above and download the FREE Taster Pack today!