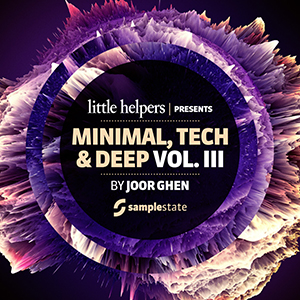 It is with great pleasure we bring you the latest Samplestate release, the third in the Little Helpers presents series, and this time produced by the Italian producer Joor Ghen.
Joor's music has featured on some of the most respected underground labels such as Moan, Serkal, Kina Music, Say What Recordings, Surface, and he's received incredible support from a wide range of artists such as Steve Bug, Livio & Roby, Oxia, Marco Carola, Darius Syrossian, Paco Osuna, East End Dubs, Francisco Allendes and more.
His other accolades include successful collaborations with Proudly People, with their track "Third Floor" reaching the Top 20 in the Tech House genre on Beatport.
Joor Ghen's sound is constantly evolving, and his production techniques and sound are unique. The level of attention to detail and technical prowess shines throughout this pack, and provides a forward thinking and inspirational pack that will inject pure underground groove into your own productions.
Little Helpers is a conceptual digital label courtesy of Andrew Rasse (a.k.a. Butane) and Sean O'Neal (a.k.a. Someone Else) launched in December 2009. Each release on Little Helpers is a strong, reduced groove-tool aimed to satisfy the increasing number of digital DJs. Much like the traditional locked groove vinyl, these tracks are suitable for looping, editing and layering. Yet at the same time, each track has enough variation to stand on its own. That is, each tune, lies somewhere between a full track and a DJ tool -- focusing solely on the rhythm or a singular idea rather than extraneous arrangements. This new series of sample product takes this concept into new territory and offered is an inspiring pack jam packed with the essential building blocks for Minimal, Tech, Techno and Deep productions.
This pack features 229 drum loops with kick free variations, tops and also those essential background and organic loops to add dimension to your productions. 110 music loops including basslines, chords, synth and vocal loops. This collection also has 138 individual drum hits and 37 FX samples. As well as this we've programmed each of the individual hits into EXS24, Halion, Kontakt, and NNXT format to make them as usable as possible.
This pack comes in 2 main formats:
Apple Loops pack - Includes Apple Loop aif files with pre-analysed and tagged drum, and music loops. You also receive 3rd party sampler instruments as well as all the other content in the other formats such as REX2.
Wav Pack - Standard wav pack, if in doubt then select this one. Contains standard wav files and is suitable for any DAW system. You will also receive 3rd party sampler instruments as well as all the other content in the other formats such as REX2.
（From  SAMPLESTATE）