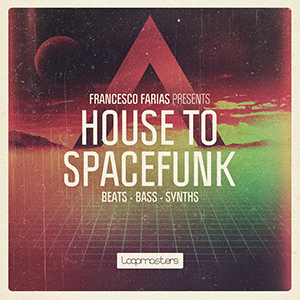 Loopmasters proudly present House to Spacefunk a collection of royalty free House and Funk Samples served up by founding member of Jestofunk the amazingly talented Francesco Farias
House to Spacefunk features over 700Mb of Funky Live Bass, Infectious Beats, Spacey Music Loops, Cool Vocals, Inspiration One Shots and a special collection of mixed groove loops for producers to filter and chop in their favourite samplers.
Francesco Farias started his DJ career towards the end of the 80's spinning records and entraining crowds in clubs along the East Italian Coast. It was in 1989 he met with Alessandro Staderini and together they founded "Jestofunk".
Co-produced with Claudio "Mozart" Rispoli they had great success with hits such as "I'm Gonna Love You" (1991) a revolutionary track that had the perfect blend of Funk with House music which opened the doors to a whole new fusion of sound for Dance music.
Jestofunk's first album titled "Love in a Black Dimension" spawned two more massive tracks with their follow up single in 1993 "Say it Again" another Funk soaked dancefloor classic and the truly awesome "Can We Live" which featured CeCe Rogers on Vocals.
1998 saw the release of the album "Universal Mother" which included the hit single "Special Love" Featuring Jocelyn Brown which was later extracted and remixed by "Steve Silk Harley". 2002 Jestofunk released the "Seventy Miles From Philadelphia" album which involved many artists such as Cece Rogers, Jocelyn Brown, Freddy Mcgregor, Cinda Ramseu, Robert Lopez, Eric Marienthal, Fred Wesley and many more.
The group went on to sell over 1,000,000 records and their incredible funky experimental sound went on to influence not only many big producers and dance music itself owes a respectful nod to Jestofunk.
In Detail expect to find 761Mb of 24Bit 44.1KHz loops and one shot sounds including 46 Bass Loops, 32 Mixed Groove Loops, 44 Drum Loops, 35 Percussion Loops, 91 Music Loops, 10 Bass Multi Sampled Instruments, 46 SFX Shots, 23 Music Stabs, 13 Orchestral Stabs, 38 Vocal Hits, 18 Lead Multi Sampled Instruments, 1 Rock Guitar Multi Instrument, 165 Drum Shots, 226 Percussion Hits, 248 Rex2 Files and 88 Soft Sampler Patches for Konta, Halion Exs24, Nnxt and Sfz formats.
Since 2014 Francesco Farias has been working on his solo project and during the end of 2014 Francesco found time to put together an exclusive collection of rare samples from his personal collection recorded and produced throughout his career, this collection of incredible groves and melodies is literally dripping with funk and will serve producers of House, Funk, Disco, Hip Hop, Electro and more with inspiration for years to come.
Check out the demo track and download the free to use taster pack and then get ready to sample Francesco Farias - House to Spacefunk TODAY!