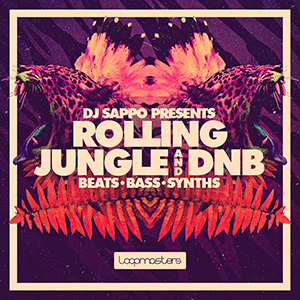 Loopmasters proudly welcome veteran Jungle & Drum & Bass DJ/ Producer DJ Sappo with a brand new Royalty Free collection of Rolling Basses and Hot Stepper Beats and Atmospheric music loops drenched in analogue warmth for Jungle Renegades worldwide!
DJ Sappo brings an exclusive 600+Mb collection of Jungle and Drum & Bass samples which represent 20 years of unending passion for Jungle and DnB from a producer who has been there from the start.
Rolling Jungle & DnB features many of DJ Sappos trade mark sounds as used in some of his biggest tunes from the 90's through the noughties to the present day on labels such as Flex, Intalex, V Records, Emotif, Rinse out, Formation and more!
Every sound has been designed, programmed & re-sampled using his original hardware samplers such as the Akai s950,Yamaha a3000 and Roland mv8800 and then re-mastered using his cutting edge analogue mastering studio using special valve compressors, EQs and pristine converters.
With 20 plus years' experience as a DJ, sound engineering & production self-taught DJ Sappo is considered a veteran of the Jungle & Drum and Bass scene. Specializing in Dnb, Jungle, Bass music, Urban & Dance Sappo is renowned for his original, rolling, punchy tracks. His achievements were recognized by BBC radio 1 who invited him to become part of the BBC 1xtra team making him the only DJ to host the first national 4 hour Jungle/Dnb radio show.
Sappo has played at top events around the globe and had releases with some of the world's biggest Dance labels, selling over 250,000 vinyl records alone via V Records, Frontline records, World dance, Intalex, Flex records, Rinse out, Formation and more Sappo has also remixed for many artists the biggest being Roni Size (Playtime) he was also the first producer to feature MCs Bassman, Spyda & Trigga on tracks (Now known as Shadow Demon Coalition). His latest album preview mix for the YouTube DnB TV channel has amassed over 350,000 plays.
In Detail expect to find 668Mb of 24Bit 44.1KHz loops and sounds recorded at tempos of 174-178BPM with 26 Bass Loops, 61 Music Loops, 28 Percussion Loops, 48 Tops and Shuffle Loops, 123 Drum Loops, 80 Bass Hits, 18 Music Stabs, 190 Drum Shots, 50 SFX Sounds, 268 Rex2 Files and 140 Soft Sampler Patches for Kontakt, Halion, Exs24, Nnxt and Sfz formats
Sappo is part of the very foundations of Jungle & Dnb, staying faithful and helping pioneer the genre since the early 90's. Now is your chance to get your hands on some of his secret production weapons, so press play on the demo track download the free to use taster pack and get ready to sample DJ Sappo ? Rolling Jungle & DnB TODAY!