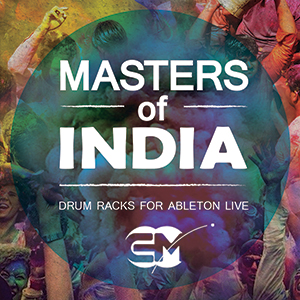 EarthMoments presents - Percussion Masters of India.
This pack was recorded with leading industry musicians all over India. All sounds & samples are recorded using A-class pre-amps and microphones while paying attention to the instruments finer details to capture their bloom in a perfect way.
Experience India's drums as never before. Own an unrivaled, premium quality pack of live drum recordings that were collected using instruments from all across India. This is a quintessential Earthmoments pack that shows the artist just how much more there is to Indian drumming than just the tabla. Every major Indian drum except the tabla is included in this pack. Also included is a bonus Earthmoments Sampler, a taster from the essential boutique sample library. The drums presented in the pack are the: Bass Dholak, Chellangai, Duki Tharang, Ganjira, Gatham Singarri, Gatham, Khol, Mirudangam, Pakhwaj, Tapatam, Thalam, Thavil, and the Udukai. For each instrument, EarthMoments has provided 10 pre-made patterns to demonstrate what that instrument is fully capable of. These are not just traditionally Indian patterns either, but include some western styles as a demonstration of the versatility of these instruments.
Instrument List:
Bass Dholak - Bass Dholak is a large wooden barrel shaped drum associated with the folk music of Punjab. The drum is hung around the neck and the bass and treble heads on either side are struck using sticks.
Chellangai - The complex movement of Indian dancers is translated into sound with the Chellangai. These bells worn as anklets serve to accentuate the intricate footwork of each dancer, moving in step with accompanying percussion. Anywhere from 50 to over 200 bells may be woven together on each string.
Duki Tharang - These little drums have beauty with brains. They can get multi dimensional when provoked. Nice and round, in chords they sound. These are a set of wood/brass shelled drums consisting of a low, medium and high pitched drum. These are fitted with leather heads held together with metal straps for tuning.
Ganjira - Like a small tambourine, Ganjira is used in South Indian Classical music. The instrument is about seven inches in diameter, made of lizard skin stretched over one side of a circular wooden frame, which has a few metal jingles mounted in a single slit.
Gatham Singarri - Often accompanying the Mirudangam, the Gatham Singarri is a clay pot placed with the mouth facing the musician, with different notes being produced through striking around the edge of the pot with various parts of your hands.
Gatham - A large clay pot used in South Indian Carnatic music. When struck, the sound is of the outside ringing of the pot, and a low resonance inside the cavity. The pitch of can be raised or lowered by opening or closing the mouth of the pot against the stomach.
Khol - A drum from northeast India used as accompaniment for devotional songs. The barrel of the drum is terracotta. The two heads of the drum are dissimilar, one being about 4 inches wide and the other about 10 inches.
Mirudangam - A rhythmic accompaniment in Carnatic music, it is a doubled-sided drum made of jack wood. The treble head of the drum has a permanent application of ferric oxide at its center to give it the characteristic metallic timbre.
Pakhawaj - The Pakhawaj tone is both rich in harmonics, and low and mellow. Regarded with particularly high respect in Indian musical culture, the bass side is smeared with wet wheat dough to achieve its distinct clear sound.
Tapatam - Straight out of Earthsync's own Laya Project, tapatam's fast and resonating bass forms an imposing crescendo and lingering bass beat for any rhythm.
Thalam - The rhythmic clap of traditional musical timekeeping is embodied by the Thalam. Small symbols clasped in the hands drive the beat of India's traditional music.
Thavil - An instrument only found in the very south of India, the left side is played with a stick while the right side is played with metal thimbles over the fingers.
Udukai - A cloth is wrapped around this small, hourglass-shaped drum, which is often used in folk songs and prayers. Any musician that wants to alter the pitch of the Udukai, changes tension around the cloth and drum again.
Please Note: Ableton Live 9.1 Suite Required
（From  EARTH MOMENTS）