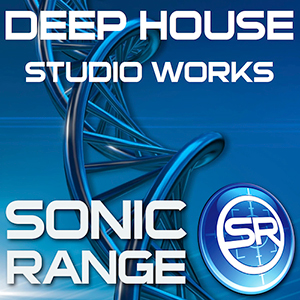 Created especially for Deep House producers searching for the authentic sound of the biggest labels in the genre including Spinnin' Records, Anjuna Deep, Toolroom Deep and Defected.

'Deep House Studio Works' has been created from ground up and consists of concentrated dissonant melodies and chromatic chords which underlie MIDI sequences.

Sonic Range are proud to announce their new series of production sample packs, MIDI packs and synth presets. Sonic Range Studio Works products feature awesome musical content and are of an unrivalled quality, designed with an emphasis on work flow and contain everything the producer needs to develop top quality tracks faster and easier than ever before.

The latest Deep House sample pack from Sonic Range has been designed with you, the producer in mind, giving you more time to be creative rather than getting bogged down in transposing loops or working out the next key change or chord progression. This allows more time to develop arrangements and other key song writing elements.

The loop pack features 900 MB of content that will become vital in taking your Deep House productions to the highest level.

Sonic Range have included all the MIDI that was used to build the melodic loops so that you are totally unrestricted by musical key - if the WAV audio loop version isn't to your taste simply load up the corresponding MIDI file with your favourite VSTi and edit away!

With over 900 MB of royalty-free samples recorded at 120 BPM, 122 BPM and 125 BPM which makes the Sonic Range 'Deep House Studio Works' the 'go to' pack for every producer and is fully compatible with all major music software.

Included in Sonic Range Studio Works series will also be Sylenth presets and Deep House MIDI keys, which when combined, become a serious weapon in any producer's arsenal. Watch out the rest of the range coming soon!
（From  SONIC RANGE）