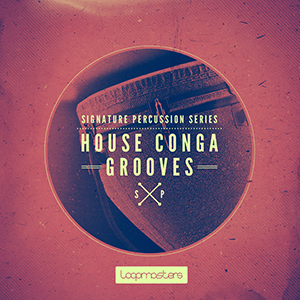 There's nothing that quite glues the rhythm track together more, than the presence of a hypnotic percussion groove in any style music. So this week Loopmasters proudly present Signature Percussion - House Conga Grooves Recorded by Rasmus Faber featuring the talented percussionist Thomas Eby.

Thomas Eby has quickly risen to be one of the most sought after percussionists in northern Europe.

Focusing on Cuban tradition, although possessing a wide range of styles, from brazilian and african tradition, to the modern sounds of pop, rock & dance-music.

Further contributing to his diversity, he is also the lead singer and recording percussionist of swedish timba/salsa band Calle Real. Thomas joined the band in the year 2000 upon returning from studies at the CNSEA and La Ena universities in Havana, Cuba. Calle Real has recently released its debut album Con Fuerza worldwide, and among other praisings the band receieved a pre-round nomination to the prestigious Latin Grammy Awards 2006, the first European band ever to be granted such honour!

Thomas Eby is a constant musical contributor, both in the studio and on stage, to Rasmus Faber and SUMO, 2 of the most prolific artist in the house music scene. Touring with these artists has brought him to all the corners of the world, and his performances on these artists records have given him the respect and admiration of all the top names in this genre.

In Sweden, you are likely to find Thomas on tour with the most famous artists in the country. Indeed Thomas sometimes seems to be everywhere, and it is certainly not for nothing he is nicknamed ”The Eby”.

Each Loop comes ready to drop straight into your mixes with subtle variations, nuances and fills making it easy to layout fully inspirational performances that will enhance your House productions and add the all important organic element that will tack your stagnant plodding beats and revive them into driving groove drenched masterpieces.

The perfect antidote to boring beats Signature Percussion - House Conga Grooves will dynamically lift your tracks, so check out the demos and sample this incredible pack from Loopmasters TODAY!
（From  LOOPMASTERS）