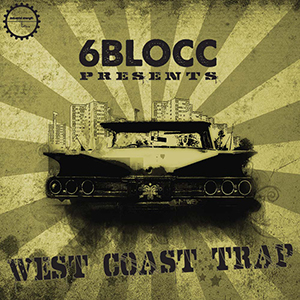 6Blocc bares his teeth and shows his twisted side in West Coast Trap, a full-on, fast-paced Construction Kit pack that drills in through the brain and out through the body. It's booty-shaking grit that brings instant night music from one of LA's hottest DJs and Producers to your DAW.

The pack unfolds six Construction Kits containing every individual element of the mind-bending style that is West Coast Trap. These booty moving kits hinge on darkly spirited grooves, repetitive rhythms, disarming effects, shifted vocals, and dense bass riffs that sound like a fleet of low riders bouncing down the street under the full moon of the zombie apocalypse.

Master of many styles, 6Blocc stirs the nastiest elements of Southern Rap, Dutch House, and Miami Ghetto Funk to their extremes, and, as always, reps his signature underground LA Hip-Hop and Dubstep that put him on the map.

Catch the hard edge style of Trap. These dirty sounds are delivered in cleanest form: top-quality 24-bit, 44.1 kHz Wav and Apple Loops to load seamlessly for remixing and layering into your own productions.

This set is one in a blazing series of packs created by 6Blocc for ISR. Don't miss Dirty Alley Breaks, Dubstep Ammo, and Hard Talking to rev up your productions across Drumstep, Dubstep, DnB, and Hybrid styles.

West Coast Trap pummels past the brink of trouble. These are sounds to cruise around with the top down, where the tight synths shriek and sirens pierce speakers like they're rounding the corner of your street. In this merciless sonic city, 6Blocc is the culprit and you're his partner in crime.
（From  INDUSTRIAL STRENGTH）

NEW SCHOOL - GET YO BREAD UP 5

NEW SCHOOL - GET YO BREAD UP 5