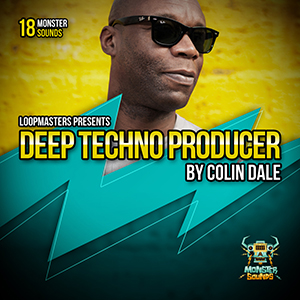 Monster Sounds is very excited to bring you a collection of unique sounds and grooves from one of the ambassadors of dance music.

Aimed at those looking for inspiration in deep techno, techno or any kind of groove based house production this is a must to check for a plethora of inspiring loop content to get you on your way.

Colin Dale is part of electronic dance music history, with a career spanning over 20 years, and a discography to put many others to shame; Colin continues to bring top quality music to his fans.

Colin Dale was heavily influenced by soul, reggae, jazz, and funk, and he attended school with future scene creators Fabio, Grooverider, Dave Angel, and Bryan Gee so it was inevitable that Colin would end up in music, in 1982 he scored the opening spot for hip hop legend, Tim Westwood, at the cult Soho nightclub, Gossips.

Colin was a major player in forming the iconic radio station, Kiss FM, establishing his ground breaking show the 'Abstrakt Dance'. Running for 16-years and showcasing DJs such as Richie Hawtin, Dave Angel, Lauren Garnier, Carl Craig, Carl Cox, the show elevated techno to a new level and taking to the Internet in 1993, a revolutionary show at the time being the first to be transmitted and streamed live with visuals, Colin lead the field.

As a Dj, Colins CV is unrivalled, from being involved in the running of 'Deep Space' throughout London, to spinning at the luminary clubs Fabric, Rex, Pasha, and Love to namedrop just a few. Colin has spread the word globally playing at major nights on every continent ensuring that his name is synonymous with techno and electronic dance music.

Bringing all this passion and knowledge of the scene it was obvious Colin would be in demand as a producer. As well as running his own label Abstrakt Dance, Colin's production skills have been enlisted by some of the best, he has recorded for labels including Obsessive, Logic, Sensei, Visitor, Swag, Laus, Alien Funk, Plastic City, Influential House, and Evasive amongst others.

With a history like this we could not resist the opportunity to get Colin to use is in depth knowledge to make a Producer pack as part of the artist series for Monster Sounds.

Colin has packed this full of the building blocks needed to help inspire you to capture this soulful and deeply tribal music.

This is an awesome collection ranging sonically from tough edgy and driving to beautifully soul touching, deep and analogue. These sounds instantly capture the sublime and futuristic essence of this much respected ground breaking genre.

Colin has also included 5 song construction kits which serve as a really good "hands on" working guide to putting a track of this style together. Each song contains the main elements from rhythm to melodies and bass all fitting together seamlessly.
（From  MONSTER SOUNDS）