Need some atmosphere in your tracks? Steve Hillier gets weirded out with the new Intakt instrument from Zero-G....

Take ten highly rated Zero-G sample libraries produced by the finest sound designers on the planet, throw in more than a gigabyte of 'never before heard' sounds and wrap them up in an acclaimed sample player by Native Instruments. Finally put the whole thing on sale at a fraction of the original asking price of the libraries. Interested?

Well, if you're as bored as I am of the standard libraries of tired drum loops, tacky analogue sweeps and embarrassing vocal snippets and need inspiration for your arrangements, then the esoteric collection of samples in Altered States could be just what you're after.

Getting in a state

Altered States is presented as an Intakt instrument, the new (and very pretty) plug-in audio engine by Native Instruments. Intakt is a close relative to NI's Kontakt sampler, with some extra features that are extremely useful for musicians using loops. The Time Machine function enables you to change the pitch of the sample without altering the speed of its playback. Great if your sample is in the right tempo but wrong key, as it acts like an instant pitch shifter and enables you to play chords of a loop and still have each instance stay in perfect time. The algorithm used to manipulate the sounds is impressive, sounding nearly transparent in normal use. Inevitably, artefacts start appearing as the sample is transposed further from its original pitch, but they're subtle. And with some of the more 'out there' samples, these glitches add an extra layer of digital weirdness that some sound designers will enjoy. There's also Beat Machine, which enables you to slice up a loop (similar to Steinberg's Recycle) and then play it back at any tempo from 10 - 315bpm without time stretching artefacts. You can also play the individual slices manually, creating your own rhythm from the source material. The most useful aspect of both the Time and Beat Machines is that the Intakt instrument instantly synchronises any loop to the current tempo of your arrangement, making the auditioning of the 993 individual loops a breeze. Actually, that's not quite true... Patches are selected using the file menu situated above the waveforem display that loads in the samples and all of its relevant settings. Trouble is, at 5Gb of sounds, Altered States is huge. With a library this generous, we're going to need a helping hand or three to navigate our way around. Sadly, the Intakt instrument disappoints greatly. There's no way of searching the library using keywords such as 'Moog' or 'analogue', or progressing through the patches by pressing a '+' or '-' icon or 'next' or 'previous' key command. And there's no point searching for a patch by file name using your operating system as you can't open the patches by double clicking or dragging onto the plug in windows. Your only way into the library is through the file selector. This makes selecting patches a pain, frankly. Zero-G could improve Altered States immeasurably by getting Native Instruments to incorporate the file browser that exists in the regular Intakt into this software.

To be fair, it's not all niggles on the patch selection front. The first patch in every subcategory contains all of the samples and settings in that subcategory mapped across the keyboard, so you can audition each patch without having to return to the file selector. Okay, so you can't play chords with any of the sounds at this point, but you can play samples using your computer's QWERTY keyboard. In fact, it's when you're first confronted with a patch with over 50 different huge samples that you realise the breadth and depth of Altered States. The Intakt instrument gives you extensive options for altering the raw samples; two envelopes |(one hard wired to sample pitch), an envelope follower, two LFOs with routing options, two warm sounding filters, a couple of distortion units and a delay line. If that's not enough for you, you can also edit the sample loop settings so if there's one element of a sample that you like, say a single bass note in a longer run, you can isolate it and play your own riff. Needless to say, you can save all your adjustments as your own patches too.

There's no faulting the sonic quality of Altered States, the whole library looks and sounds professional. I like the Native Instruments sound - from Battery through to Intakt and Kontakt, they all sound clear, detailed and musical; something you can't say of many samplers out there! You can confidently use an Altered States patch as the basis of a whole composition, or have it running quietly in the background, sounding crystal clear without swamping the arrangement. Altered States is not for everyone, thorugh. If you're looking for an everyday workhorse library there are very few traditional instruments featured in this collection. The occasional Arab flute turns up, but we're mainly looking at dense, atmospheric loops and strange noises from esoteric sources. We're talking lush soundscapes, some sounding like they've been recorded on the ocean floor, some from the planet Pluto! There's more here to interest Aphex Twin and his friends than for Natasha Bedingfield to move to. The drum loop section is outstanding, many of which actually sound like they'll make it onto hit records. How many drum loop libraries can you say that about? Special mention must also be made of the pad section of the library - the best collection of pad sounds I've heard, and a good enough reason to buy Altered States on its own. There's too much reverb and stereo width on some samples that can limit their usefulness, but really I'm nit picking here; this is a product where the sound quality positively shines. After all, we're talking about samples made by some of the best-respected sound designers in the business, and you can trust their reputations. This library is well suited to composers working in TV or radio where spot effects and musical beds 'straight out of the box' may be just what's needed. I spent a mesmerised couple of hours trying to work out how these sounds were made. There's no explanation in the documentation and so what? We're not looking for realism here, just atmosphere and a touch of the unusual, which Altered States has in spades. This is a library for creatives- imagination rules here.

So, if you're seeking a multisampled oboe or valve miked Rickenbacker you're in the wrong place. But if you need a sample library to expand your mind and your sound palette, add some depth to your arrangements, or just make your partner go 'what the hell was that?!', then Altered States must be on your shopping list. 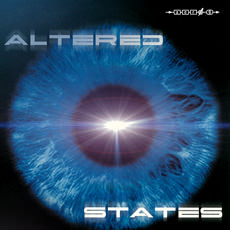